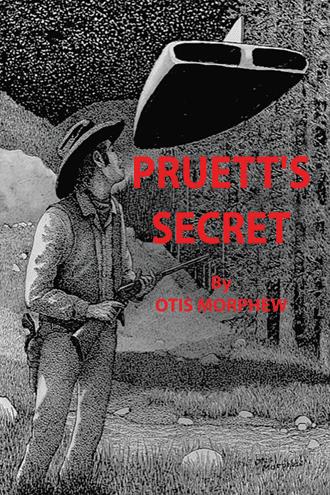 Thousands of people watch the skies in wonder, tens of thousands watch because they believe,…and many hundreds have been witness to unexplained objects in the sky, most with common sense enough to know the difference between something of this earth, and something that is not! Then there are those who are of one mind, to disbelieve!...Why? Because they have never been witness, or just never thought about it,…they know who they are! Max Pruett was one of the latter. He never considered the possibility, until he witnessed it first-hand. But the memory of this sighting will last forever. He was a cattle rancher, pure and simple, he had a wife and son,…and until that night was happy with his life just the way it was. Staying the night on Carbon Creek, on land that he owned, he witnessed the strange, gliding, almost silver-looking object glide over him not fifty feet off the grassy meadow,…and then watched it crash, nose-first into a two hundred foot tall solid clay bluff, not a half mile away. When he investigated, he was thrown into an adventure that would last ten days as he would help an alien visitor from a distant world destroy an invading killer from even further away. Failure could possibly change the world’s religious beliefs, and possibly the future, because the alien killer was a destroyer of civilizations,…and they would have to find him in some of the most rugged country there was, The Rocky Mountains of central Colorado!...And no one would ever know, because he was sworn to secrecy. Find out why in “Pruett’s Secret” Thank you for reading.

As I have always been a believer in life on other worlds, this is my first attempt at a novel of this kind. Hope you like it! Of course it is of a western genre, as I love the old west, and love writing western novels. Check them out by using Google, Yahoo, etc., type in Otis Morphew and go to my site. Or go to books and type in title. Thanks, Otis