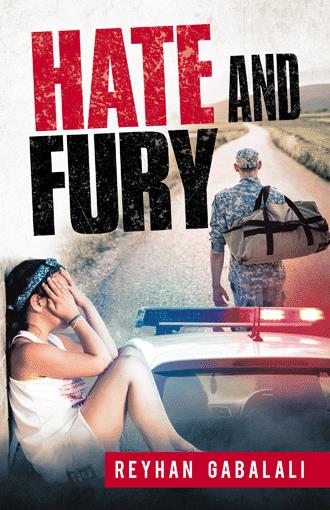 The novel "Hate and Fury" is the authors's first work in a foreign genre. As we read the novel, we feel the alternating tense moments, the emotions that historical periods evoke in human destinies, we see the causes, roots, scale of complex and tragic events, and get acquainted with the deeds and struggles of patriotic sons. The author tries to reveal the character of the work, special officer Michael Grady, to reveal his character, including his spiritual world as a human, and personality, to show the physological aspects that make him constantly proactive in the ups and downs of life. The work reflects the difficulties faced by the hero in his childhood and adolescence, his great leap into life, career advancement, worries, desires, dreams, love, suffering in this way, betrayal, evil, crime, and punishment. The hero's victory is the culmination of the work. But this victory is not easily won by him. In the first part of the work, readers get acquainted with the artistic image of a hero who served in a peacekeeping force in Afghanistan with his group during a difficult and complicated period. The main goal of the hero is to fight against the enemy to ensure the security of the civilian population. He is not alone in this struggle, and around him there are enough brave, friendly, principled comrades-in-arms. But the hero is always in tension. On the one hand, he is always worried about the horrors of war, the lives lost, on the other hand, the longing for people he loved, whom he left behind in his homeland and for some reason could not hear about them for days.

Hajiyeva - Gadirova Reyhane having a literary pseudonym Reyhan Gabalali was born in 1968 in Gabala region in the Azerbaijan Republic. She is a doctor by profession. She has been engaged in artistic creativity for a long time. Her first poem published in 2004 called “Ways of Destiny”. The author is a laureate of the “Golden Pen” and “Khurshidbanu Hatavan” awards. The novel “Hate and Fury” is the authors’s first work in a foreign genre. Even though the plot line keeps readers with tension the culmination point end with victory of the justice. This work clearly shows how author’s way of seeing world and life is formalized.