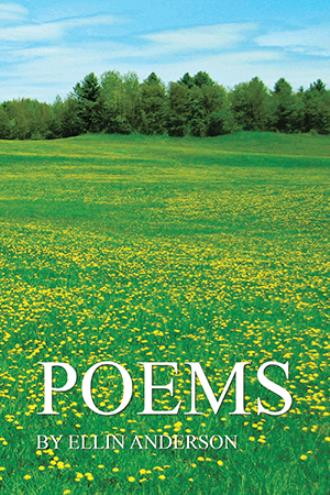 BLIZZARD By Ellin Anderson The road is gone, the air is white, The moon cannot be seen; A million diamond bees in flight Are raging round their queen — At least, that’s how it looks to those Whose minds drift to caprice: Perhaps a flock of shaggy does Were shorn of crystal fleece — Or else a host of fragile souls That kindness could not keep Are borne upon a wind that rolls And will not let us sleep. The snowflakes drape eccentric shapes That vanish with a look. And then, wherever darkness gapes, The traveler finds a hook, And struggles with a wraith of chalk That will not let him go, Or turn around, or even talk — It lays his spirit low; And then, his turning back becomes the triumph of the snow! Unique in isolation, A choir in making moan, Uncounted snowflakes — every one Like to himself alone. Their strength is indivisible, Invisible their guide, Their destiny — ice worlds to fill, A cold Earth in its pride. THE CICADA By Ellin Anderson Layer upon layer of laziness, of haze On haze, unfolding as the summer strung Her swag of beads: idyllic days on days, And at their apex, the cicada sung, With warm sustain, a note as on a lyre When my own voice was silent in the heat, And the fierce dogstar held his wand of fire Above a landscape parched but ever sweet, Like maple timber that conceals the last Hot sugar drops, until flames hold them fast. Long in your hidden season, you lay low For a youth’s age in years, far underground, But when the summer called, you were not slow To rise and add your timbrel to the sound Of ripe cicadas in a heady swoon, A towered choral at the emerald height Of lush contentment, on an afternoon When buds upon the vine had blossomed white In garlands where the nectared grape will hang, And where the hum of endless choirs rang. No locust are you — there’s no plague of song, Only shared happiness as mornings fly Towards the autumn, with a hidden throng Singing for short-lived love, and soon to die. Gold wings of resurrection mark your worth, Pinned upon inspiration’s ecstasy, A music box as black as secret earth Where hordes return to sound the mystery Of knowing when to rise again and follow Flight of the singing finch and gilded swallow. SQUIRRELS IN THE WALL BY Ellin Anderson Did you hear a noise — what’s that? Call the sheriff, call the cat! Something’s scratching, fast and faster, On the insulated plaster. Where the old foundation’s thin, Bold red squirrels may get in. Have we been infested there? Yes, we have a guest — beware! They might chew things, drop a flea: There goes my home equity! Tell me, who ya gonna call When a squirrel’s in the wall? Dear Saint Francis, gentle one, Friend of earth and moon and sun, Little squirrels only charm; Let us pledge to do no harm — Likewise, let them harmless be. Let us know your charity, And may your blessings on us fall, With love for creatures great and small. The smallest have much to forgive, So let us pray: Live and let live, Within the wall, or acorn grove, Or cuddled by the glowing stove. AUTUMN LEAVES By Ellin Anderson A quickening, a briskness in the air, A lust for florid words against the dark; A single tree sends up a signal flare Of scarlet warmth against the greenwood, stark As flame at sunset on a funeral pyre For some well-storied hero — summer lies In such a wreath of blood, a shroud of fire, Where all too soon, the breath of winter flies Down to the lawn, to gleam as silver frost; Old season gone, we cheer its crimson cost. By field and yard, in breezy forest dell, The maple blooms in passion’s tempting red, Not just of apple, but the candy shell That celebrates the hallowed and the dead; On other trees, the emeralds turn to coals Upon a trembling branch that sheds hot light, For ice has blanched it, as the season rolls Away deceptive days, however bright: Transformed, transcended in one chilly night, The oak is red and gold, resplendent sight! His ear cocked to the wind, the crow will perch On ground of purest blue, against the sky With coin of golden aspen, leaf of birch; When all have shown their colors, all must die, For summer’s green was just a screen of youth; The red, the gold, the orange of the fall Show us the soul beneath it, and the truth, As when we bowed our heads before the tall And leafless trees, in woods whose height and length Revealed the secret of undying strength. All poems © 2021 by Ellin Anderson. All rights reserved. No part of this work may be copied or used in any way without written permission from the author.

Ellin Anderson's poems chronicle a life spent in New England, from her first look at the sea in New Bedford as a toddler (“Point of Departure: Massachusetts”) until the present time (“Destination: Vermont”), which finds her enthralled by the beauty of the Northeast Kingdom — three rural counties that honor the past while facing a changeful future. “Sojourn in New Hampshire” marks a journey through Seabrook, Rye, and Derry, and on through the hills into the Great North Woods. “Storyland: Legends and Legacies” features poems inspired by fairy tales, figures from history, and our mythic past. The book concludes with twenty classic poems by Johann Wolfgang von Goethe, as rendered into English by the author. A formalist in the tradition of John Keats and Emily Dickinson, Ellin has won many awards for poetry in the United States, Canada, and Great Britain. She was born in Boston, graduated from The Pingree School, and received a B.A. in Art from Mount Holyoke College. For many years, Ellin was a member of the Longfellow Poetry Society, which met at Longfellow’s Wayside Inn in Sudbury, Massachusetts.