We Spend Our Lives 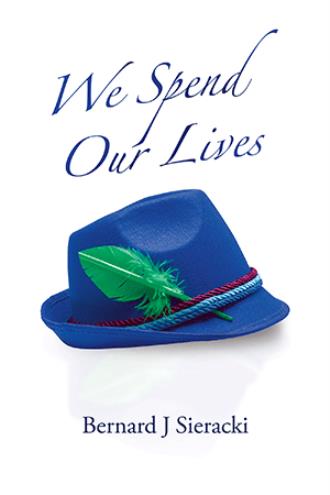 Finally the brakes squaked, the wheels skidded along the tracks, and the streamlined train slowly came to a stop. It was the Union Station of Kansas City, and the passengers hurried out of the cars onto the crowded platform of track sixteen. Some carried a suitcase to one side of them. A woman came along loaded with a shopping bag, an arm full of boxes, and three little children straggling close behind her. But most of the people carried nothing at all, as they walked alongside the standing train toward the escalator leading up to the passageway through which the people proceeded on to the lobby. In the lobby, a countless number of people waited at the doors. Some were eating popcorn or candy, or drinking Coca-Cola out of a paper cup as they waited for the arrival of their friends or relatives. Upon the arrival of the passengers from the train, in all the excitement, there was much handshaking, and embracing, and kissing of the loved ones. A short ways from the doors, at the bookstand, were two girls talking excitedly to each other as they looked on with the excitement of expectation. One was taller and appeared somewhat more mature than the other. The younger seemed to be more excited about something than her companion. They stood in one place, but they certainly looked about in all directions with their faces filled with the excited emotions of the imminent recognition of someone. As the people came pouring through the many doors on the passageway, a soldier slipped out of the crowd and stood by with his eyes searching through the crowd. From his decorations, one could easily tell that he was an active man in the army, and the captain's uniform added a decided attraction to his entire self. He scrutinized the faces of women. Often he would raise his left hand to bring part of a letter to his eyes. He would study some girl's appearance as he referred to the letter. Soon he began wandering about impatiently through the crowd. The last of the people from track sixteen straggled into the lobby. The doors were closed, and the crowd at the doors began to dissipate. It wasn't long before most of them had left. The captain, with his back against the doors, still holding the letter in his left hand, looked about with signs of disappointment. The taller girl of the two, left; but her companion remained. She wasn't looking around so feverishly any longer. Her downcast eyes and slow motions of her body showed all the signs of a heart heavy with disappointment. Her thoughts were drifting far away and her lips quivered as if she were about to cry. The captain studied her several times before, but, after referring to his letter, he turned elsewhere. She also looked at him several times but paid no more attention. As he watched her this time, he saw her disappointment, and instinctively started toward her. He worked his way around to her back, and he drew up close enough to embrace her.

Johnnie Jones returns home from the military as a unknown hero. He develops a romantic relationship with two girls of the same family, the family of a friend of his. Adventures continue as he goes to college and becomes a football star. Along the way he gets advice from a sweet old lady that leads to a very happy ending.

Bernard Sieracki was born in Chicago on the northwest side. He was educated at Our Lady of Victory Elementry School and Weber High School before enlisting in the United States Air Force. He spent five years active duty before enlisting in the North Dakota National Guard while attending Minot State College. Upon graduation he attended DePaul University in Chicago then Creighton University in Omaha for an additional degree. After graduation, he spent a little more than twenty years working for the Roman Catholic Church. He currently resides in rural southeast Kentucky.