A Decade of Theatre For Seniors: A Journey of Aesthetics and Innovation in Later Life 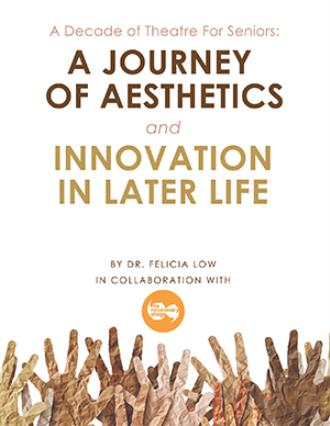 Chapter 3: The Theatre for Seniors Programme by the Necessary Stage Theatre For Seniors (TFS) was launched in April 2008 by The Necessary Stage (TNS). It was a three-year programme which aimed to provide seniors in Singapore with formal training in various aspects of theatre-making, such as acting, directing, playwriting administration and technical work. The programme was led by the Artistic Director of The Necessary Stage, Alvin Tan, supported by resident playwright Haresh Sharma. Theatre facilitators Jean Ng, Julius Foo, Jalyn Han and Judy Ngo were regularly called on over the initial three-year programme to conduct various training sessions for the seniors.   Back in 2008, the only theatre group that catered to seniors was Glowers, led by theatre practitioner Catherine Sng. Glowers was a voluntary group and sessions which were held by Sng provided for a mix of social gatherings, theatre training sessions and opportunities for performance. Alvin noted that other than Glowers, retired seniors in Singapore had little opportunity to access meaningful activities such as theatre, citing his own parents as an example, who only went for leisurely ‘excursions to Malaysia for durians, or to visit an otah factory’[1]. Keen on extending the theatre-making experience through an “immersion programme” (Tan, 2011), Alvin envisioned TFS to be a space, or environment, where “ordinary people” (ibid) could learn the “macro overarching perspective to art-making” (ibid), while honing “micro demands of the discipline” (ibid) through the mastery of theatre-making skills such as acting, directing and administration. The Necessary Stage thus designed a three-year curriculum[2] for this purpose and announced an open call for about 50 participants to join their programme. They received an overwhelming response, with some applicants being put on hold should anyone decide to drop out of the programme. This indicated that there was indeed public interest in accessing arts training among the senior population in Singapore.   Over three years, TFS produced three annual performances which featured a total of 50 or more senior participants. Made up of participants from both an English speaking and Mandarin speaking group, TFS produced Encore I: An Evening of Ageless Theatre in 2009, Encore II: Heartland! Heartland! in 2010, and Encore III: Family Knots in 2011. TFS however, did not come to an end with Encore III. No longer organised as a three-year programme, TFS members, as a senior theatre group continued to participate in various workshops and performances for seniors, organised by The Necessary Stage. In 2013, for example, Encore IV was produced with 13 members of TFS performing with musicians and theatre professionals[3]. TNS continued to actively open opportunities for senior members of the public to participate in training workshops, as a means to grow the membership pool of TFS. As TFS gained public recognition, other institutions, such as NTUC, commissioned TNS in 2014 to conduct a training workshop under their ULive Programme for seniors. Participants from this workshop continued with TFS activities after this workshop, as did participants from other ad hoc workshops that TNS conducted for senior members of the public[4].   The Necessary Stage also encouraged the graduates of their three-year training programme to self-organise and conduct theatre outreach for other seniors, facilitating the formation of the Theatre For Seniors Interest Group (TFSIG) between 2011 – 2013. Members of TFSIG were guided and supported by TNS and other theatre practitioners to conduct training workshops and perform for community groups, in partnership with various organisations and institutions, at various community settings[5]. This development in TFS pointed to the possibility that seniors who had enjoyed and benefited from the theatre programme would be able to share their experience and skills with other seniors, and create a way of extending the theatre process on their terms. It reflects an aspiration on the part of TNS for theatre to belong to these seniors, such that they could initiate and lead a theatre project on their own. [1] Personal correspondence with Alvin Tan in 2010. [2] Refer to Table 1 for details of this curriculum. [3] Refer to Annex 1 for details of all productions carried out under the banner of Theatre For Seniors between  2008-2020. [4] Refer to Table 2 for a listing of all training workshops conducted by TNS between 2013-2019. [5] Refer to Table 3 for a list of all productions and works carried out by TFSIG between 2011-2016.

A Decade of Theatre for Seniors examines the Theatre For Seniors (TFS) programme started by The Necessary Stage in 2009. This program aimed to make theatre practice avaliable and inclusive to older members of the community. Since 2009, TFS reached an estimated 40 seniors, and can boast of at least 10 formal public performances presented by TNS, alongside commissions to perform at local events such as PassionArts and also at eldercare Homes.. This study asserts that in later life, aspects of aesthetics and innovation are relevant and all the more important, as past roles in life recede. Using a person-centered pedagogical framework for artists working with communities, this report analyses and presents how aesthetics and innovation are demonstrated via engagement with TFS activities, through opportunities for personal, social, cognitive growth and cultural representation. Data was collected by means of interviews with participants and artist-facilitators of the program, together with and studies of past recordings of performances by TFS. Through thick description, the study asserts that proactive engagement with theatre does enable growth towards life fulfilment, responsibility to others, flexible and precise thinking in the later years of life. Proactive engagement in the arts therefore provides the Singaporean senior with a path of growth towards collective maturity and health.

Dr. Felicia Low, a graduate of Goldsmith’s College, is a visual artist, art educator and author. A Lee Kong Chian scholar of the National University of Singapore, Felicia obtained a PhD in Cultural Studies in Asia in 2015. She has also developed research and written a pedagogical guide on Person-centered Arts Practices with Communities, with support from the National Arts Council (Singapore). She continues to work with various social institutions and organisations to conceptualise and coordinate arts programmes and research. Felicia is the founding director of Community Cultural Dimensions, which aims to provide a critical discursive platform for artistic practices that engage with communities in the Asian region. Her publications include Autogenous Culture as Political Form: An Investigation into Participatory Art Practices in Singapore (2017), The Art of Anti-Exclusion (2018) and Person-centered Arts Practices with Communities: A Pedagogical Guide (2019).