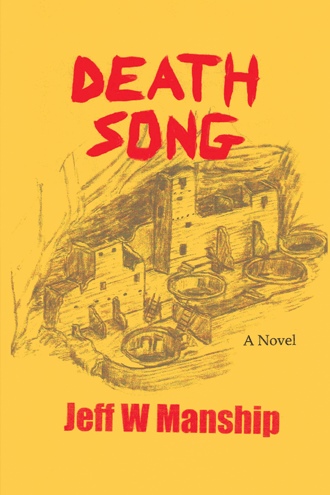 My heart fairly leaped into my throat as an errant gust of wind caught the half-barrel in which I hung suspended over the cliff face and sent it bumping and bouncing along the rough sandstone wall. I heard a startled grunt from above as the hands straining on the rope slowed the barrel's descent and attempted to steady the swinging and pitching of their burden, and then, once again, slowly continued lowering me into position. As dangerous and frightening as it appeared, this had been deemed the easiest manner to place the charges of dynamite along parts of the surveyed route through the Hole. In order to widen the narrow notch near the canyon's rim sufficiently to admit the workers, we had successfully blasted an opening through the hole wide enough to accommodate the wagons that we hoped would soon be trundling through this passage down to the roiling waters of the Colorado River. After weeks of blasting and filling, the upper part of the road was completed, but now we were working to extend the trail over an even steeper and more treacherous part of the passage. Visions of being dashed to pieces on the jagged rocks below or of getting the rope wedged between rocks and left hanging next to an exploding charge of dynamite filled my mind each time I was lowered over the edge of the cliff. No such mishaps had as yet occurred during the weeks we had spent digging, blasting, and carving our roadway through the rock, yet I quaked with each blast of explosive, with every sound of splitting rock and tumbling debris. Placing the carefully packed charge of dynamite into the pre-drilled hole and touching the glowing tip of the coal ember to the fuse, I hollered up to the eager hands above to hoist me up and away. In rapid response to my call, the barrel quickly began to rise up the cliff face while I pushed away from the wall with my hands to keep it from catching on the many sharp protuberances and outcrops. I had scarcely reached the top of the cliff and was clamoring out of the barrel when the explosion sounded, followed by the clatter and thunder of broken rock fragments as they cascaded into the narrow crevasse below. "Not so quickly, Brother Hatch. There are a couple more charges to set down there before you come climbing out of your barrel," laughed Ben Perkins, noticing the fear and reluctance inscribed perceptibly across my features. 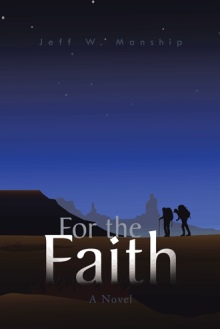 Out of the deserts of the Southwest rides a band of renegade Apaches. Led by the mysterious warrior and holy man, Juliano, they have fled the reservation in a last-gasp effort to unite with other bands of free Indians in a violent uprising against the hated white man. In a remote corner of Utah Territory, a small company of Mormon settlers crosses the canyon of the Colorado, blasting a treacherous road through a steep, narrow notch in the imposing sandstone cliff s. Sent by command of their prophet, they hope to befriend the Indians and establish a new settlement near the San Juan River. And hidden deep in the labyrinthine, red rock canyons lives a mysterious and ancient people who inhabit the graceful cliff dwellings of their long-dead ancestors. Three widely different cultures will collide in a whirlwind of violence and betrayal; Philo Hatch and his Mormon brethren, in search of their abducted children; Juliano and his followers, seeking a sacred treasure once spoken of in ancient tribal legends; and the Recordkeepers, an ancient indigenous tribe isolated for centuries in the twisting canyons of the southwestern desert, a people who only wish to preserve their dying way of life and the sacred records they were entrusted with in a distant age.

Jeff W. Manship was born in Boise, Idaho and has lived most of his life in the Western United States. After serving a two-year mission to Mexico for the Church of Jesus Christ of Latter-Day Saints (Mormons) he attended Boise State University where he earned a Bachelor of Science degree in Geology. His multi-generational Mormon heritage, and an interest in the geography, history, and culture of the American West are all major influences in his writing. He and his wife, Robbin, are the parents of three children. Jeff and his family currently reside in Idaho Falls, Idaho. Death Song is his first novel.