‘Through the Eyes of a Tiger’ 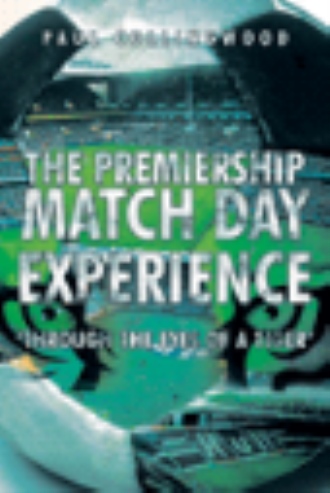 The hunt for beer and food begins, but we are soon distracted by all the protests outside the stadium. King Kevin Keegan has walked out on the club, blaming the interference of Mike Ashley and Dennis Wise in transfer matters. Roughly translated, this means that they are not giving Kevin handfuls of cash, preferring instead to secretly sign young players from abroad; players that Kevin has never even heard of. Keegan enjoys God-like status on Tyneside, so the fans are one hundred percent behind him. Th eir thoughts are summed up on a huge banner, which has been unfurled in front of the Gallowgate End, outside the Shearer Bar.

The banner is attracting a fair amount of media attention, with presenters and cameramen from all of the major TV channels swarming around interviewing a succession of disgruntled locals. Strangely, as part of the demonstrations, home fans are also planning to boycott food outlets within the ground, believing that this is going to have some kind of indirect infl uence on Ashley’s tenure. This policy obviously also includes the purchase of match programmes, as we are given a bit of abuse when we approach the stand nearby. The lonely looking vendor is clearly getting wound up and he tells them all in no uncertain terms to ‘go forth and multiply.’

It seems that all of today’s shenanigans may well work in our favour; not from a football point of view, but from a pub grub point of view. We slip almost unnoticed into the spacious ‘state of the art’ Shearer Bar, and fi nd it half empty. Th e customary scrum at the bar does not exist, and within seconds, we are knocking back Newcastle Brown Ale whilst watching the early Premiership clash between Liverpool and Manchester United.

Not all of the home fans have gone along with the boycott – a Geordie and his pint are not easily parted – and our black and amber attire acts like a magnet to them. One larger than life lady in the garish purple Newcastle away shirt sidles over to wish us the best of luck. Her sentiments are genuine, as she believes that a Newcastle defeat will hasten the end of the present regime.

‘Let’s hope your defence are in such a generous mood,’ I declare. ‘Defence? Defence? This is Newcastle man! We don’t have a defence. Where the hell have you been for the last fi fteen years?’

We are interrupted by another depressed local with a dark cloud hanging over his head. He is selling dodgy looking tickets for a half time draw, and even though it looks like a sure-fi re scam, we part with our pounds, before pressing him for some Toon team news. Instead of giving us the starting line up, he reels off a list of injured players who will not be appearing, particularly strikers, which makes us think that we might actually get some points from this match. Then we mention Alan Smith, and his cloud darkens.

‘Don’t get me going on Alan Smith,’ he groans.

But it’s too late. He has already got going. He launches into a statistical analysis of Smith’s strike rate. Apparently, he only scored one goal in over forty appearances last season, and that was in a friendly. ‘Call him a striker?’ he concludes. ‘He couldn’t strike a fucking match!’

Eventually, we move upstairs, where another queue-free bar is available to keep us fed and watered. Th is really is a first class facility and Mr. Shearer must be rightly proud to have such an establishment named after him. We are assured by the punters that it is normally heaving on match days, so the timing of this fi xture couldn’t have been better from a thirsty City fan’s perspective. Th e glass fronted building looks out onto the stay-away protesters below, who are now laying their striped tops in the middle of the road, allowing cars to drive over them. I think they are losing the plot.

Our long stay here means that I don’t get too much time to check out other facilities. Th e standard array of food outlets are available inside the ground but I don’t make my usual assessment of the hot dogs, as I’ve already had one in the Shearer’s, and very nice it was too.

It’s big, but it looks a bit like a giant multi-story car park from the outside, and it feels like it once I’m inside, scaling hundreds of steps to reach the upper tier of the Sir John Hall Stand. But, the view from Th e Premiership Match Day Experience the top is worth the climb. St James’ is a stadium of two halves, and we are in the huge half. I am in awe of the enormous Milburn Stand to my right and I smile a little smile of disbelief that Hull City are now visiting such majestic arenas on a fortnightly basis.

Looking to the front, I can see right over the top of the Gallowgate End, far into the distant hills. Th e view extends to the left, above and beyond the East Stand. Th is is the stand that you generally see on the television screens, where the words ‘NEWCASTLE UNITED’ are printed in bold black capital letters along the bright white front edge of the rooftop. My lofty vantage point must give me one of the best views in the city, although a cynical person might suggest that the best view of Newcastle can be found in the rear-view mirror of your car.

It’s not until the game gets under way that I note the absence of a scoreboard and a clock, unless it is hidden away in the lower tier of our stand. Then, well into the second half, I spot a small digital device tucked between two advertising boards just near the corner flag, counting down the ninety minutes. Call me slow on the uptake, but it turns out that there are four of these, one in each corner, and they all have my surname sitting next to them in large letters in the form of adverts for Collingwood Insurance. You tend to miss these things when the football on offer is so absorbing, and it turns out to be a very entertaining match.

Despite all the local unrest and threatened boycotts, there don’t appear to be many empty seats in the ground. Th e folk up here love their football too much and have rejected the tempting alternative of traipsing round the Metro Centre with the family. A banner held aloft by one elderly die-hard fan nearby attempts to point out that they’re not here to line Mike Ashley’s pockets. ‘I’m only here to support my team,’ it reads.

A highly vocal section of home fans are located just to our right, and several of the early choral off erings make it patently clear that they want Kevin Keegan back. Th ey have unwittingly provided the Hull faithful with some early ammunition here as we harmoniously 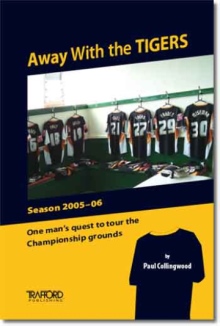 Away With the Tigers
Paul Collingwood
$17.30

When the Hull City Tigers football club of England hit the big stage of the Premier League for the first time in their 104-year history, several thousand fans vowed to visit all twenty stadium grounds for the Premiership. Devoted fan Paul Collingwood took the opportunity to conduct a personal survey to see which “grand day out” ticked all the right boxes. The Premiership Match Day Experience is his entertaining, tongue-in-cheek result.

The season-long mission produced a few surprises for Collingwood and a whole lot of excitement. After all, his prime motives were to sink some beers and enjoy the Tigers’ first ever season in the top flight!

Which stadium provided the best experience? Find out in The Premiership Match Day Experience.

Paul Collingwood is a teacher in Hertfordshire, England. Born in Hull in 1963, he has been a regular at Boothferry Park and the KC Stadium since January 1971. Collingwood is married and has three children.