Master Your Memory with Dr. Amazing

How Not to Forget 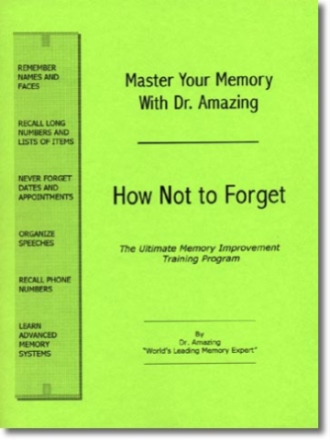 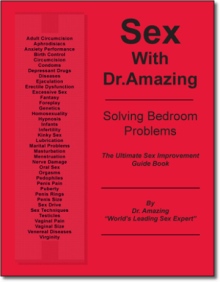 AN EXAMPLE OF HOW MUCH SIMPLER DR. AMAZING'S MEMORY SYSTEMS ARE THAN THOSE ESPOUSED BY CONTEMPORARY MNEMONISTS.

In his book, How to Develop a Super Power Memory, "Harry Lorayne in 1957 proposed hooking together picture wordswhich represented the sets of digits.

"Let's say that you wanted to remember that Mr. Silverberg's phone number was JU 6-9950. You might "see" a picture of a shiny silver iceberg sitting in a court room as a judge(JU 6) smoking a gigantic pipe that's covered with lace!"

Lorayne also divided the trunk line into two sets of two digits:99 = pipe and 50 = lace. He did recognize the need to tie the phone number to Mr. Silverberg. The problem with his proposal was that it was difficult to determine which came first - the pipe or the lace. He called it his "fly in the ointment." His proposal required the use of three picture words to be hooked up to the picture words representing the name of the person. This is not easy to do.

To reduce the number of hooks, Lorayne suggested using only one word to represent all four digits of the trunk line. But we know how difficult it is to find 4-digit words.

Today, with our longer phone numbers, the use of a hook system is a near impossibility. I'll show why.

The following is an illustration from Bob Burg's The Memory System, published in 1992. He calls it a chain link method, but it is the same series of hooks Lorayne used 35 years earlier. Only in 1992 there were three additional digits in a phone number.

"The next telephone number you need to remember belongs to your accountant, Bruce Strauss; it is 215-5332. In beginning your Chain Link, you could use an adding machine to remind you that his number is for your accountant. In this case, however, he is also a friend, so you want to lock in his number by way of his name. The name Strauss itself does not present a mental picture, does it? Let's use the Soundalike mouse. That sounds enough like Strauss to remind you of his true name, doesn't it? For the prefix 215, you can use noodle (nu, duh and luh). Of course, you could also use natal, needle or anything that would fit... The next step is to remember the four numbers, lime (53) and moon (32) . Now, associate mouse with noodle. See this mouse sneaking his way into a bowl of noodles. In fact, there is one noodle that looks particularly good. You feel the mouse needs to add something to make the noodle taste even better. That's right, some lime (53). See this mouse squirting a sour-tasting lime on that noodle. Now, wanting true dining atmosphere, our squeaky hero goes outside, taking with him this noodle sprayed with lime so he can eat it under the moon (32)light. Bruce Strauss' telephone number is 215-5332."

Isn't that enough to make you vomit? What sane person would ever go through that mumbo jumbo to recall a phone number? And, Burg didn't even integrate the area code into his chain link!

Available words in Dr. Amazing's Dictionary of Word/Number Conversions for these four sets of numbers are:

In seconds you can make up some memorable sentences by picking out one word from the list for each number, such as:

Adams' nutmegs bushel soaks a seal.
In Adams' nightmare a pugilist socks Sally.
Adams entombs the bachelor in a sack of swill.

Voila! Repeat any of the phrases a few times, and you have memorized Adams' number.

It is not really a "how-to-do-it book." Authors touch briefly
on several memory systems, but the book primarily is
about memory. After reading the book, you could ask
yourself what you retained and answer, "very little."

Consists mostly of memory tests and almost no instruction.

This is the best of the recent books. He covers a number
of topics. His method for remembering telephone
numbers is unduly complex and unworkable as a
practical memory system.

This is merely a reprint of their 1974 book. It is severely
dated with references to such as Woody Hayes, football
coach of the 50's and the Ed Sullivan Show. A number
of topics are covered but very briefly. Not in teaching
form and no tests given.

These four books taken together touch on several memory systems, but all are limited in the number of systems covered and none delve deeply into teaching more than one or two memory systems.

None of the above books contain a word/number converting dictionary, which is essential for converting three-digit groups of numbers into words so that numbers longer than four digits long can be remembered.

None of these books contain the newest memory system of MAPPING FOR MEMORY.

None of these books are designed as teaching instruments, with one lesson leading to the next.

None of these books provide complete lessons on any of the memory systems they touch upon. Dr. Amazing's book is designed so that the reader will prove to himself at the conclusion of each chapter that his memory has been improved by using techniques taught.

Most of the topics covered by the books above are unduly complex and disorganized so that it is extremely difficult for a reader to become proficient with recall or to improve his memory.

None of these books contain information on how to organize materials for better recall.

MASTER YOUR MEMORY WITH DR. AMAZING: How Not to Forget will be the bible of memory for many years to come because it presents a sound foundation of memory principles, it is all-inclusive [Dr. Amazing has a library of just about every memory book published and in print since 1812], and it has practical lessons with tests. The book is ideal for a college course or for corporate sales groups education. Every person wanting to use memory systems in every-day life will need to keep the book for a reference since it contains the Dictionary of Word/Number Conversions in the Appendix.

Dr. Amazing's book is based on actual teaching of memory systems and stage presentations by Dr. Amazing over a period of 30 years. His methods have been proven to be interesting and effective. He gets down to the business of improving memory and stays with it. The book is easy to read and it contains a sprinkling of good humor throughout.

Born in the heyday of Dunninger and Dr. Franz Polgar, the leading hypnotists and mentalists of the first half of the 20th Century, Dr. Amazing was fortunate to later become the friend to and physician for Dr. Polgar [who could locate a dollar bill hidden in the city of New York]. Dr. Polgar inspired Dr. Amazing to become his successor as the Dean of American hypnotists/mentalists.

A true Renaissance man, Dr. Amazing went on to the stage just after entering law practice. While in college his brilliance and mental capacity was demonstrated when he was inducted into four honorary societies, including the senior men's honorary at Ohio State University. This capped a year in which he was the Big Ten debate champion and business manager of a college magazine.

While teaching hypnosis to doctors, he decided to switch careers and he entered medical school at the University of Miami, Florida. During his freshman year, he was invited by the medical school to teach hypnosis. From his course on hypnosis, he wrote his first book, Hypnosis Induction Technics, Charles C. Thomas Co., publisher. It now is in its fifth printing.

Although Dr. Amazing became a prominent medical doctor, he has continued to perform hypnosis shows and to teach memory improvement. He is equally at home on the stage, behind a lectern and in front of a television camera. Finding the time, he also has written three novels and numerous screenplays.

On the stage and during memory improvement seminars, Dr. Amazing has performed memory acts which no one else in the world can do. These demonstrations have induced thousands to utilize the memory principles he teaches to improve themselves socially and economically.

A natural student, Dr. Amazing has researched all the published works on memory improvement. He not only has improved on all the known systems, but during his more than 30 years of teaching and performing, he has designed new and very effective memory systems - all of which are set forth in his newly-written book,Master Your Memory with Dr. Amazing: How Not to Forget.

This book contains far superior systems for remembering lists of objects, long numbers, telephone numbers, dates and appointments, than ever before published. Although a number of memory books have been published, their complexity has presented difficulties for the average reader. Master Your Memory with Dr. Amazing: How Not to Forget makes learning memory systems easy.

Included is a chapter on Mapping for Memory. This radically new memory system has never before been published in a memory book.

A Dictionary of Word/Number Conversions, which allows the recall of series of long numbers, is a specially added feature.

Anyone who has ever forgotten where he put his car keys or the name of a person he met at a meeting, is a potential purchaser of a book that is easy to read, goes step by step and makes an improved memory within reach.

Wayne Allyn Root, author of The Joy of Failure and a nationally known motivational speaker, read the first draft of the book and called to state that he has successfully started using the innovative techniques of remembering names and faces set forth in the book. Wayne offered to be the celebrity person to represent the product.

Darrell W. Hall, National Management Association, wrote of Dr. Amazing, "You are a Gallery of Knowledge, on the spotlight of a New Frontier with your Specialized Memory Show."

Following a memory demonstration, Softaware, Inc. posted on their website, "the demonstration that followed did not disappoint. Leading off with his 'Knightly Moves,' Dr. Amazing wove an intricate pattern on the number board that was extraordinary to watch. Then lots of spontaneous memorization of names and numbers were followed by the world-famous completion of a Magic Square where all columns including diagonals add up to 69."

With his stage show talents, Dr. Amazing is an attraction on radio and television talk shows.