IN SEARCH OF THE DONNELLYS 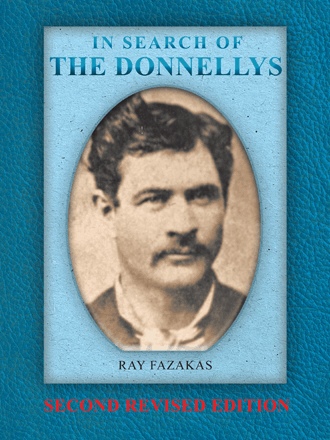 Why did a vigilance committee of close neighbors massacre several members of the Donnelly family in the early morning hours of February 4th, 1880? The victims included James Donnelly, his wife Johannah, their two sons and a niece of the old man. They died at the hands of their fellow church members in their log house on a road known as the Roman Line near the village of Lucan in the County of Middlesex about fifteen miles north of London, Ontario. Two other sons had died not long before, one in seemingly mysterious circumstances that are still argued about to this day, and another in a barroom squabble. The new priest of St. Patrick’s parish was implicated in the massacre to the extent that, when circumstances drove him to oppose the Donnellys shortly after his arrival in the community, he founded a so-called Property Protective Association that quickly evolved into the Vigilance Committee. Its own members called it the Peace Society. This new book, In Search of the Donnellys, Second Revised Edition, continues to explore the roots of the feud and recounts the author’s personal adventures in the fifty years he spent searching for such information throughout North America and in Ireland. The new information fills in some gaps, expands some areas, and further accounts for some of the controversy which continues to surround this fascinating bit of North American folk history with Irish roots. It adds some interesting elements such as the ultimate fates of the Lucan constable, Sam Everett, and the parents and siblings of Johnny O’Connor, the little boy who hid under the bed and witnessed the massacre. It also reveals the discovery of the Protestant connection in Ireland of the Donnelly family. Included is intriguing new information about Bridget Donnelly, one of the victims of the massacre, and her family back in Ireland and, for the first time, reveals the New Zealand connection to the family. Intriguing new information and photographs never before published of and about Emma Rees of the Salvation Army, as well as the Keefes and others enhance this revised version. Several chapters are devoted to the later lives of the members of the Donnelly family who outlived the massacre as well as their progeny who have survived to the present-day, including their attitude towards their historical ancestors and their enemies. The author is uniquely positioned to remark on these aspects of the story in that he has come to know members of almost every branch of not only the Donnelly family but those of the vigilante families themselves. In this connection, it is interesting to note that he is the only person who ever interviewed the last member of the family bearing the now famous surname when, forty years ago, he tracked down the only surviving son of William Donnelly, the acknowledged brains and leader of the family. The author also puts to rest several myths and legends about the story including the courtship, marriage, family life and children of the only sister of the seven Donnelly brothers, Jenny. In this connection, the author recounts his personal adventures with those children as well as their progeny, many of whom he eventually made contact with over the years. Also covered is the hitherto little known information about Tom Donnelly’s only son, Tom, Jr., as well as the eventual fate of the widow and children of Mike Donnelly who was killed in Slaght’s Hotel in Waterford just weeks before the massacre of his parents, siblings and cousin. 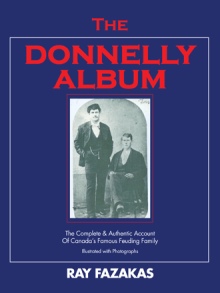 The massacre of the Donnellys by their fellow church members has fascinated the public in the English-speaking world for well over a hundred years. Contained in this book are intriguing new photographs never before published and significant new information, which will pique the interest even of those who have been familiar for years with this bit of North American folk history with Irish roots.

Ray Fazakas is a retired lawyer who has spent fifty years in researching the Donnelly story and is widely recognized as the foremost authority on the subject.