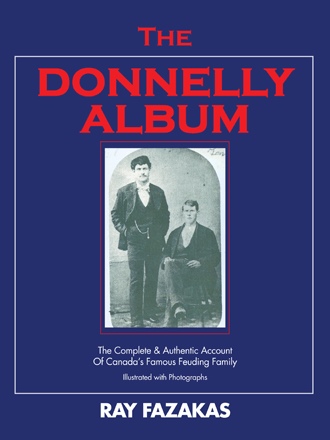 HANDSPIKES By pausing in her pioneer chores and cocking an ear at the doorway of her rude log shanty, Johannah Donnelly could just barely hear the distant din of the logging bee over at Maloney’s farm. It was Thursday, June 25th, 1857. Mrs. Donnelly could not help feeling anxious as she scanned the blackened treetops, for she knew that most of the neighbourhood men had gone there to work––and to drink Maloney’s whiskey. Among them was her husband, James Donnelly, and Patrick Farrell, a near neighbour and bitter enemy. The presence of both men at the bee could spell trouble.1 Maloney’s farm was a short distance north of Donnelly’s place along the road known as the Roman Line. Officially, the road was the road allowance between concessions six and seven in the obscure backwoods township named Biddulph in the County of Huron. The county formed part of the vast million acres of the Huron Tract, which had been granted by the British Crown to the Canada Company for exploitation of the land by its settlement. The Roman Line, like most other pioneer roads of the day, straggled fitfully through the bush in varying degrees of obstruction. Most of the smaller trees had been cleared, but the path was strewn still with the burned and blackened stumps of bigger timber or the fallen branches of others. The latter had come from the great elms, killed merely by girdling. The dead giants stood stark and helpless, thrusting their brittle, spreading branches forlornly into the sky, to await gradual demolition by wind and storm. The Roman Line was named after those who lived there, all Irish Roman Catholics who had settled the road from end to end some ten or fifteen years before. From distant Tipperary they had come, to hack out from the forbidding forests of the New World a living more promising than that ordained for them in the restrictive confines of the Old. At Maloney’s several gangs of men toiled with chains and oxen, enlarging the little clearing of five or six acres in which Maloney’s shanty stood and in which a small patch of potatoes had already been planted. As was the custom at such pioneer bees, the Irish usquebaugh flowed freely. Water of life, the name signified, but Thomas McLaughlin, grog boss for the day, well knew that too liberal potions of the fiery liquid often resulted in the opposite effect. Among those partaking freely of the bog whiskey were James Donnelly and Patrick Farrell. The proprietor, William Maloney, was not at all happy to see Jim Donnelly at his logging bee. While Donnelly had always been friendly enough in the neighbourhood, the forbidding scowl on his face––for which he was well known––told Maloney that he had come more with the intent to make trouble than to work. Engaged in the labour that day were three teams of men, six men to a team. Jim Donnelly chose the job of driving the oxen of one team belonging to a man named Mackey. Mackey’s brother, Martin, worked on another team consisting of Cornelius Lanagan, John Broderick, Michael (Mick) Carroll, Patrick Farrell, and two other men. All of them lived 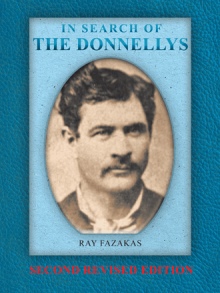 IN SEARCH OF THE DONNELLYS
RAY FAZAKAS
$19.95

The Donnelly Album By now everyone in Canada knows at least one version of the brutal slaying of members of the Donnelly family on the night of February 3, 1880. The Donnelly Album tells in compelling detail the story of the Donnellys—James and Johannah and their seven sons and one daughter. Arriving in Canada from Tipperary, Ireland, in the 1840s, the family settled in the boisterous Irish pioneer community in Biddulph Township near London, Ontario. For the next thirty years, their activities gained wide notoriety in the surrounding district. The father was once convicted of murder but escaped the gallows. The sons grew up to be handsome, reckless, enterprising in business, and dangerous in combat. Largely because of their presence, Lucan, the village nearest their farm home, became known as the widest town in Canada. What is it about the Donnellys that have fascinated so many people for many years? Were they really as wicked as their enemies have portrayed them? Why was no one ever convicted of the murders? What happened to the surviving Donnellys? Why do local people today still fell so strongly, both pro and con, about the family? After fifteen years of exhaustive research, Ray Fazakas has produced the definitive account of the famous feud and its tragic consequences. He has also collected an astonishing treasure trove of old photographs, contemporary drawings, maps, and documents of the Donnellys, their murderers, and the sites and people involved in the events. This unique combination of narrative and illustration recreates not just an epic tragedy but an entire segment of Canadian frontier life. Ray Fazakas is a well-known Hamilton lawyer.

Ray Fazakas is a retired lawyer who has spent fifty years in researching the Donnelly story and is widely recognized as the foremost authority on the subject.