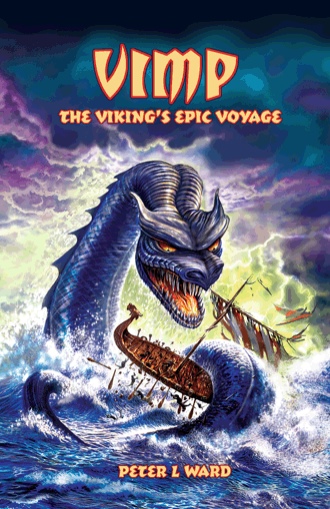 Beyond the protection of the far headland, the boat began to rock on the rising swell. None of the rowers knew where they were going. The buffeting of the waves strengthened by the minute. ‘Don’t be afraid,’ Freya cried. ‘Remember my powers. Trust me and we’ll reach the place we seek. The gods have selected us for a special mission.’ A strong gust of wind struck the boat. Vimp grabbed for the side as the vessel tipped, threatening to throw him overboard. One or two of the rowers slid from their wooden benches. They scrambled up again as Lief clawed onto the mast. ‘Keep rowing!’ he yelled above the howling wind. ‘Stick to the rhythm.’ It was work for grown men. Vimp clambered alongside Bjorne, struggling with his oar.‘I’ll give you a hand,’ he offered. Cold spray lashed his face, soaking his jerkin. Vimp sensed panic all around him. The girls huddled at the bottom of the boat where icy water slopped over them. As the moon appeared briefly in a gap in the angry clouds, Vimp was able to take in the situation. The funeral ship was in danger of being tossed around like a cork battling against the waves. He caught a fleeting glimpse of Eric wrestling with the side rudder, determined not to stray off course. Vimp’s heart went out to him. Brave Eric, strong as an ox, refused to give in to the sea. His determination gave Vimp new strength to encourage his rowers. ‘Fight!’ he shouted. ‘Give it all you’ve got.’ His words were lost in the howling gale but the apprentices responded. With Bjorne steady again, Vimp crawled forward to help another rower who’d tumbled from his bench. Fresh blood trickled from a wound on the boy’s chin. Vimp wrestled the oar from his grasp and plunged it back into the churning sea. A jagged streak of lightning ripped out of the clouds. It crackled into the water and was followed by an ear-splitting thunderclap. The boat rose onto the crest of a big wave before pitching down the other side. The fearful rowers fought for their lives. They had no time to be frightened. Putting their backs into the work they pulled hard as the next wave crashed into the boat, threatening to plunge it to the bottom. Then Vimp saw something that convinced him he was losing his mind. High on the raised prow of the vessel, the ghostly form of a young maiden appeared. She was clothed in pale green. Her slim outline glowed in the darkness. Other maidens joined her to dance on the waves, twisting and twirling in the teeth of the gale. The ship filled with an ethereal green light. To Vimp, it seemed these extraordinary figures were mocking the efforts of his oarsmen. A second crackle of lightning fizzed over the sea’s raging surface. Vimp was dismayed to find his oarsmen had ceased rowing. From the startled expressions on their frozen faces he worked out they’d seen something dreadful. Following the direction of their glazed eyes, he turned to see the gigantic bearded face of an old man rising from the waves. Sea water streamed from his skull and trailing wisps of beard swirled in the turbulent waters. He spoke in a tumultuous voice, drowning out the whine of the wind. ‘Who are you who dare set out upon my ocean?’ he cried. ‘You have seen my daughters dance about your vessel. Once you see the wave maidens, your end is near. No one survives such a sight!’ He reached out with hands the size of the ship. Claw-like fingers closed over the mast. ‘With these hands,’ he thundered, ‘I shall carry you to the depths of my kingdom!’ Freya sprang to her feet and thrust her face into the wind. A golden light shone on her and she held aloft her musical horn. ‘I know who you are, old man,’ she cried. ‘You are Aegir, God of the Oceans. Your wife is Ran. Her net traps innocent sailors, smashing their boats against jagged rocks. Move aside, Aegir. Let us pass!’ The ancient ruler of the oceans threw his head back and roared with laughter. ‘Who are you, mighty mouse, who dares defy me? I shall crush your boat until it is no more than splinters upon the surface of my ocean.’ Freya raised the horn to her lips, faced into the wind, and blew. The waves subsided and the Sea God found himself at a loss to speak. ‘I am Freya,’ the girl told him. ‘You must respect my name and powers. When I blow once more upon this horn, my music will drain your strength.’ Freya blew. The eyrie sound carried across the waves. Aegir raised his hands above his head, let out an unhappy groan, and sank slowly beneath the waves. The waters churned and bubbled. Abandoning the moon, dark storm clouds permitted its magical light to dance once more upon the sea. Freya’s golden glow dimmed as she stepped down to be with her friends. Only the poet, Lief, had witnessed all that had taken place between the young Viking girl and the God of the Sea. One by one, the boys picked up their oars and rediscovered their rhythm. The boat pressed forward. Soaked and starving, the crew rowed into the night. 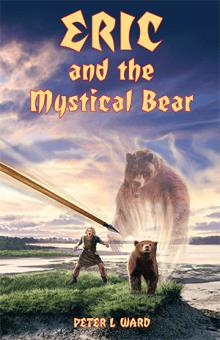 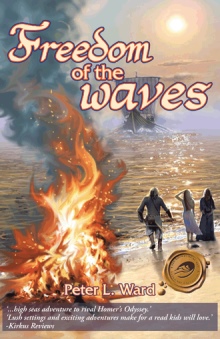 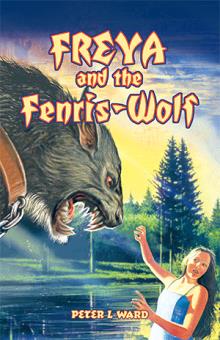 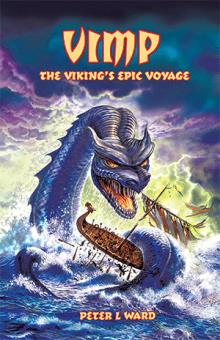 Can Vimp and Freya and friends rescue a Saxon slave girl from sacrifice? Seizing a longboat they set out on a hazardous voyage, dicing with death. Upsetting Aegir the Sea God, defying pirates and escaping the deadly venom of the Serpent of the World, the young Vikings are guided through fog by friendly dolphins.

They land on the Saxon shore but what sort of welcome can they expect? Will hidden watchers on the cliffs view them as friend or foe?

An Honours Science graduate of the University of London, the author also spent many enjoyable years teaching at Primary and Secondary level. It was in Primary teaching that he discovered his taste for children's literature.

A member of Kent County Trust for Nature and RSPB, Royal Society for the Protection of Birds, the author maintains a keen interest in local, national and global ecological concerns.

Peter Ward is a former Club cricketer but more recently qualified as an ECB coach. He went on to found a Junior Club in the Kent village in which he lived. At that time, he also followed his musical interests, playing the piano and singing in the local church choir.

Father of two daughters, the author now lives close to the southern edge of Bewl Water, in East Sussex.