TRAVEL, RESEARCH AND TEACHING IN GUATEMALA AND MEXICO

IN QUEST OF THE PRE-COLUMBIAN HERITAGE VOLUME I, GUATEMALA 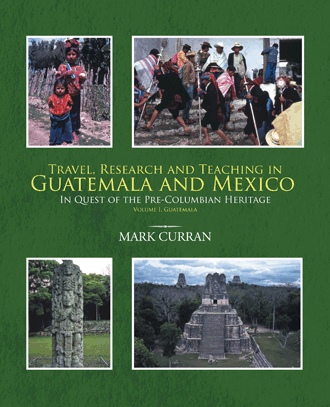 An Introduction to Tikal This major Mayan archeological site is a jewel of the Classic Period from approximately 300 to 900 A.D. It is located in thick tropical rain forest in the Department of the Petén in northern Guatemala and is close to several other important sites like Yaxchilán and Uaxactún. The site is sometimes used in an analogy as the “New York” of the Mayas referring to the immense height of several of its pyramid-temples (as opposed to the “Paris” of the Mayas at Copán in Honduras for the complexity and art of its carved stelae). It is also located in a national park and much of the pleasure of the site is found in experiencing the forest, the animals such as howler monkeys, immense flocks of parrots, and even the cutter ants we saw at work in the forest. The site is large, some six square miles. It was discovered in 1848, rediscovered in 1877 and again in 1904. The area was populated as early as 600 B.C., but Tikal came into its own between the 6th and 9th centuries A.D. Once thought of as a city of “peaceful philosophers” by early students of the Maya, it is now known because of the successful deciphering of the hundreds of Mayan glyphs that the dynasty of kings of Tikal ruled in despotic fashion and was in fierce competition for territorial expansion with neighboring city-states such as Calakmul and later on Quiriguá. There is now confirmed evidence of war, bloodshed, capture of enemy soldiers and to some extent human sacrifice, thus contradicting the really “romantic views” of the early scholars. But notwithstanding the above, Maya accomplishments in tropical agriculture, conservation of water, the art of sculpting its historic markers, the stelae, and the painting of ceramics with the same “glyph markers,” and perhaps most importantly, the monumental construction of its temples are indeed to be reckoned with. The Mayan language in effect made it possible for them to write history in stone and ceramics. And the interest in astronomy and the long-count in Mathematics allowed them to achieve knowledge and greatness. The pantheon of Mayan spirits and gods is a story in itself. The important historic link between the leaders of early Tikal and the magnificent civilization of Teotihuacán in central Mexico marks an important part of their history and early development. The Site Itself: It is both a park and archeological site and no population is allowed in it. The many monuments include: Pyramids 1,2,3,4,5 Stelae representing kings, nobles, and warriors; these are monolithic sculpted stones of 2 to 3 meters in height with images on one or two sides and with glyphs on the others explaining the stone which is really a historical marker. The North Acropolis: smaller temples with some tombs The Central Acropolis: smaller temples with some tombs. Twin Pyramid Complexes built each “Katun” or twenty years 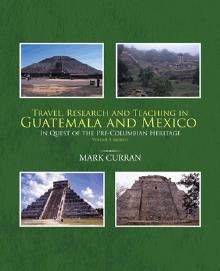 TRAVEL, RESEARCH AND TEACHING IN GUATEMALA AND MEXICO
MARK CURRAN
$14.50

This book is entitled Travel, Research, and Teaching in Guatemala and Mexico: In Search of the Pre-Columbian Heritage (volume I, Guatemala). This book in its totality of two volumes has various facets: it is comprised of anecdotes and thoughts on travel, research, and teaching in Guatemala, Honduras, and Mexico from 1962 to 2000; it is a reflection on important topics and concepts of pre-Columbian culture, and finally, it is a summary of classroom guidelines and Professor Curran’s notes on a major work on the civilizations of pre-Columbian Guatemala, Honduras, and Mexico and important documentary films on the same. Volume I treats Guatemala and Honduras. Again, volume I on Guatemala treats modern urban cities and rural towns near the pre-Columbian sites: Guatemala City, Antigua, Lake Atitlán, Chichicastenango, and towns of the Verapaces in Guatemala. The well-known pre-Columbian sites in volume I are Copán in Honduras and Tikal in Guatemala. In addition, an overview of the latter is seen in a textual and pictorial summary of the holdings of the Museo de Antropología e Historia in Mexico City, the best of its kind. The book is richly illustrated with black-and-white travel photos by Curran.

Mark Curran taught Spanish American civilization at Arizona State University in a career spanning forty-three years. His PhD in Spanish and Latin American studies from Jesuit Saint Louis University prepared him for this endeavor. Intermittent study, travel, and research in Guatemala, Honduras, and Mexico took place from 1962 to 2000 with emphasis on modern indigenous centers and famous pre-Columbian sites.