TRAVEL, RESEARCH AND TEACHING IN GUATEMALA AND MEXICO

IN QUEST OF THE PRE-COLUMBIAN HERITAGE Volume 2. MEXICO 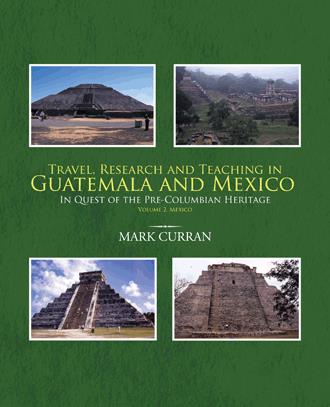 Palenque is from the classic period and is the site farthest to the west in the Maya area, 300-900 A.D. It also was the first major classic site discovered. It is well preserved and noted for the beautiful architecture and sculpted lintels both in stone and stucco. It is considered the most beautiful Pre-Columbian site in Mexico “for the intimacy and relation between the buildings and the tropical forest. The sun light that passes through the morning fog is always special.” One hears the sounds of tropical birds and even Howler Monkeys. It is considered the site with the most refined of American Pre-Columbian art. A chronology of Palenque is as follows: 1740. Antonio de Solís, a Spanish priest, discovers one of the walls of Palenque while digging in the soil in the planting of a crop. 1805. The first real expedition to the area takes place. 1832. A German count, Jean-Frederic Maxi Millen de Waldeck (an artist) lives with a lover for one year in the ruins in what we now call “The Count’s Temple” in the North Grouping. 1840. This marks the arrival of Stephens and Catherwood to the site where they spend one year exploring the ruins and making drawings which will appear in “Incidents of Travel in Central America, Chiapas and Yucatán,” a classic in the literature. 1923. The first expedition is conducted by Franz Blom. 1952. Alberto Rus of the National Museum of Anthropology discovers Pacal’s Tomb! Palenque represents the architectural height of the Mayas: there are works in stucco, ceramics and sculpted stone. There are no stelae or wooden ceiling “dinteles.” The temples are of an architecture which is more sophisticated than that at Tikal or Copán: there are corridors within the buildings, subterranean stairways, galleries and forts in time of war. Much of this was done by the technique of building parallel, successive Maya arches. The glyphs in Palenque were deciphered in 1988, an important moment for the study of Maya culture; 800 of 1000 glyphs are now deciphered. The site comprises fifty square miles, and twenty-five per cent is excavated. Another major difference from other Maya sites: the roof combs (“cresterías”) are much more delicate in style. 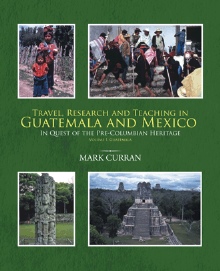 TRAVEL, RESEARCH AND TEACHING IN GUATEMALA AND MEXICO
MARK CURRAN
$14.23

This book is entitled Travel, Research, and Teaching in Guatemala and Mexico: In Search of the Pre-Columbian Heritage (volume II, Mexico). This book in its totality of two volumes has various facets: it is comprised of anecdotes and thoughts on travel, research, and teaching in Guatemala, Honduras, and Mexico from 1962 to 2000; it is a reflection on important topics and concepts of pre-Columbian culture, and finally, it is a summary of classroom guidelines and Professor Curran’s notes on a major work on the civilizations of pre-Columbian Guatemala, Honduras, and Mexico and important documentary films on the same. Volume II treats Mexico. An introduction and overview of the sites in Mexico is seen in text and photos from the Museo de Antropología e Historia in Mexico City, the best of its kind. Again, volume II treats modern urban cities and rural towns near the pre-Columbian sites: Mexico City, Oaxaca, San Cristóbal de las Casas, and Mérida in the Yucatán. The well-known pre-Columbian sites in volume II are Teotihuacán, Monte Albán, Mitla, Palenque, Uxmal, Chichén-Itzá, and Tulum. The book is richly illustrated with black-and-white travel photos by Curran.

Mark Curran taught Spanish American civilization at Arizona State University in a career spanning forty-three years. His PhD in Spanish and Latin American studies from Jesuit Saint Louis University prepared him for this endeavor. Intermittent study, travel, and research in Guatemala, Honduras, and Mexico took place from 1962 to 2000 with emphasis on modern indigenous centers and famous pre-Columbian sites.