VOL. IVB WHO WROTE THE GOSPELS? 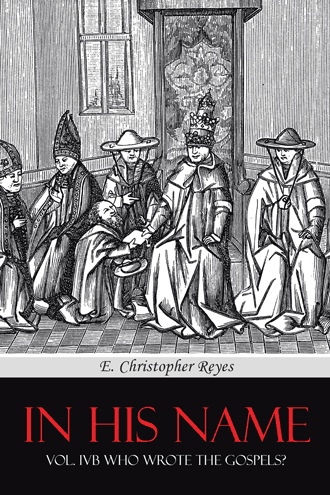 One naturally assumes that when they listen to their Pastor, Reverend, or Priest, that they speak the truth, and takes for granted that when the Pope speaks, he also speaks the truth. Yet few Christians are conscious, much less concerned to hear about the truth, or of how they have been deceived for centuries, and betrayed again by their sacrosanct religious institutions bent upon enriching themselves by their ignorance of the faith’s history and gullibility. This book deals with the truth, the truth, which many Christian sects do not wish to convey to their followers. For almost two thousand years Christians have maintained that Jesus was God incarnate, a sinless man, a man born of a virgin mother, a man who was the embodiment of perfection on earth, which is unflinchingly stated in their Christian Bibles, the New Testament, “[Jesus] Who did no sin, neither was guile found in his mouth.” ~I Peter 2:22, King James Authorized Version. Cf. Luke 2:48, Joseph is Jesus’ father (?). “We are dying today from the fact of not having anyone who knows how to lay down his life for the Truth.” ~Pierre Teilhard de Chardin, S.J., quoted in The Jesuits: The Society of Jesus and the Betrayal of the Roman Catholic Church by Malachi Martin, author of Vatican and The Final Conclave, pg. 286, 1987.

Mr. Reyes was born and raised in Los Angeles, California. Contracting infantile poliomyelitis at about three years of age, he was confined to an iron lung for a long period of time, then wore braces from his chest down to his feet with Canadian crutches to assist him in walking again. Always fascinated about the subject of religion, he has endeavored to research the truth and has often come under the wrath of the fundamentalists. Mr. Reyes, in his books, goes back to the beginnings of Christianity, its impact upon society, and how it spread across the world.