With Chapters on Precision 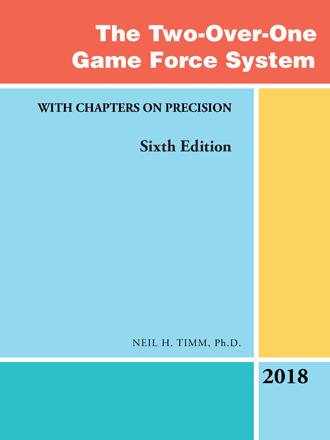 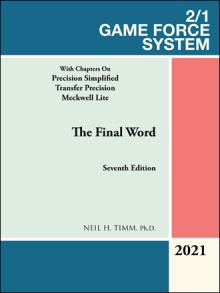 The Two-Over-One Game Force System is an improvement over the Standard American System that has been in effect and played by bridge players for many years. The advantage of the 2/1 System is that it allows the partnership to know that game is possible with only a single bid. I have presented the fundamental aspects of the bidding structure in this book. While many players “claim” they play 2/1, this is not the case. They have allowed the bidding structure of Standard American to prevail, like bidding suits up the line or ignoring the Walsh club. I have tried to change behavior by presenting a series of bids geared toward the 2/1 bidding structure where simply stated means that any auction that starts with an opening one-bid that is followed with a response at the two level of a lower-ranking suit represents a game forcing bidding sequence. Included in the book is Bergen, Reverse Bergen, and Combined Bergen raises, inverted minor suit raises with crisscross and flip-flop, cue bidding, modified scroll bids, and a Modern Splinter Convention. The Chapter on Slam bidding has been expanded to include asking for aces and king’s simultaneously, the Baron 4NT convention, expert Gerber, and more. Material on Roman Jump overcalls, the Mc Cabe Adjunct and the Reverse Mc Cabe Adjunct, Bergen’s Jacoby 2NT bids, Meckwell major suit bids and Meckwell responses to minor suit openings, minor suit Stayman, Kokish Relays, Tartan Weak Two Bids, The Walsh Club Convention, the Principle of Restricted Choice, additional methods for interfering over the strong precision club bid, Variable Roman Keycard Blackwood, Spiral Scan bids, the Swedish 2NT bid, and the Modified Blooman convention when interfering over strong or weak notrump bids. Also included is an update of the Minorwood and the Roman Keycard Blackwood Conventions, Two-Way New Minor Forcing with modified Wolff Signoff bids and new bidding sequences using Mini/Weak notrump. The topic of Offense to Defense Ratio (ODR) is included in this revision as well as expanded bidding sequences when opening and responding to the bid of 2♣ playing the “The Two-Over-One Game Force System” and new Bridge Rules have been added to Chapter 10. Finally, four-way transfers as played by experts, the nebulous 2♣ convention, a 1430 6-pac RKCB Convention that does not require the queen asking bid, hand evaluation using Zar points, and the use of vacant places (spaces) when playing a bridge hand have been added to this edition. Neil H. Timm is professor emeritus from the University of Pittsburgh, where he taught statistics for thirty-five years. He has written several books on Multivariate Analysis and Linear Models. This is the 6th edition of his book on the Two-Over-One Game Force System. He has also written a book on Precision. He has developed a new bidding system called Modified Scroll Bids, Montreal Relay bids, a new modern splinter convention and a new 1430 Roman Keycard Blackwood system that replaces the Jacoby 2NT response when opening a major to facilitate slam bidding.