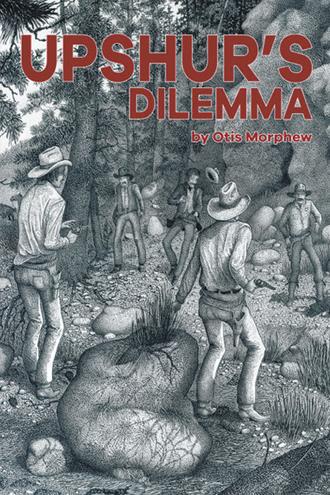 William Upshur, his family and close friends enjoyed a life of mostly serene happiness at their mountain retreat in the Choctaw nation, His close friend, Rodney Taylor and family, and his, operated a trading post there. All was perfect, but as usual, not everlasting. Rodney Taylor read a wire to him at dinner one night telling of the murder of a close friend and attempted murder of a woman who shared his love. he, his wife, Connie, Rodney and wife, all knew they would have to see about this and were met by the killer, his boss, and a tangled web of law breaking in their effort to bring justice to bear. But he is William Upshur. Would he be able to solve his dilemma, and get justice for his other love?

Billy Upshur had always been a man of reason, able to think out any problem that might arise and handle it objectively. It was his nature if it involved family. If it did not have to do with family, it could most generally be solved with a gun in one way or another. But the one he had on returning home with his family and friends, could not be solved with tact, or with his gun. The one he had now, was one he was trying desperately to push to the back of his mind, hopefully, even to forget. But it was hard, because Jaclyn Garnette was a woman he would remember for as long as he lived. He would never hurt Connie, that was unthinkable, his love for her was never ending, and just the thought of leaving his beloved family for another woman was devastating to even think about. It would never happen, he knew this, but it was hard to look at Connie with Jaclyn on his mind, thats why he spent a great many late afternoons at the corral grooming the little Roan mustang, and the big black Jim Stockwell had given him. After several months, he did manage to push Jaclyn aside, or so he thought. Because as the old saying goes, when it rains, it pours! As fate was bound to have it, they were all sitting down to supper late one afternoon when Rodney brought news of a heartbreaking event, one that almost broke his heart, one that would throw him back into the role of gunfighter, and manhunter. Jaclyn’s Foreman had been murdered, and she herself seriously wounded, and fighting for her life. To Billy Upshur, they both were considered family, and without saying, when family was wronged, as was his way, he would see about it! Only this time, Connie insisted on going back with him, because Jaclyn was the woman that saved his life, and she was bent on being there for her as well. It also meant that Rodney, and his wife were to go with him also, and he dared not refuse any of them. Something was definitely wrong in Decatur, Texas, and he had been summoned by Jaclyn’s friends to make it right again, and if it was the last thing he ever did, he would see about it!

My name is Otis Morphew, eighty years old and with nothing to do but write about the subjects that I love best, namely the old west, and of my town, Paris, Texas. I have always been an artist, doing mostly pastel portraits and oils of a western genre. Also an illustrator. I have been a Baker, travelling salesman and Security specialist, of which I retired from. Writing about western life and gunfighters, the way it must have been is what I love best. I hope you will love my Paris, Texas gunfighter. Thanks, Otis Morphew