a fictional autobiography of Ronald Reagan 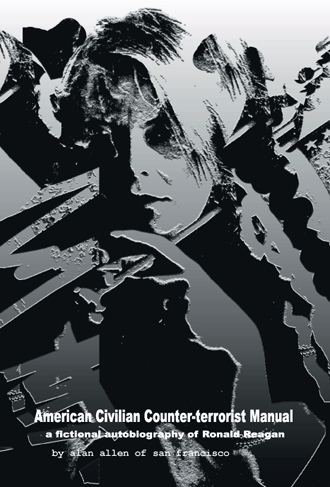 (Spring 2010) This historical novel finds President Reagan at odds with his daughter, Vice President, White House Staff and Cabinet as Ronnie and Nancy try to do the best acting of their lives to leave the White House, alive. (unabridged edition)

Based on autobiographies of the Reagan family, Cabinet, and White House Staff, the 650-page book includes a 250-page epilog of documentation and a 50-pg researchers' index, footnotes, and an extensive appendix including charts from: Staff Report, Committee on Banking, Currency & Housing, House of Representatives, 94th Congress, 2d session, Aug. 1976 -- Federal Reserve Directors, a Study of Corporate & Banking Influence.

The charts trace from 1913 to present the family dynasties of the private owners and interlocking directorate of the Federal Reserve Bank and other G-8 central banks (the World Order and New World Order) whom Bill Casey, George Shultz, the Bushes, bin Ladens, Thyssens, Rockefellers, Rothschilds, Browns, Harrimans and Reinhard Gehlen worked for and against whose family ancestors the American Revolution was fought and whose family decendents today continue to dominate the financial, political, economic, and bailout and foreclosure landscape with financial terrorism.

Additionally, the historical novel follows the family dynasties of the private owners of the interlocking directorate of the Fed/G8 including Bank of England and Bundesbank and other central banks involved in the American Revolution of 1776, the American Civil War, the depressions in the late 1800s and early 1900s, the founding of the privately owned Federal Reserve Bank in 1913, WWI, the financing of the Bolshevik party from New York and thru Ruskombank which supplied U.S. technology and weapons and military vehicles to communist Russia who supplied them to the Viet Cong to kill Americans.

The appendix also includes documentation of the Clinton-era involvement with HUD corruption when Bill was Governor and Hillary was a HUD attorney. HUD sold billions of dollars of foreclosed properties in East L.A. at ten cents on the dollar to the Fed-founded Dillion-Read bank.

Ronnie was advised about the marriage of the oil and illegal drug industries, and the case by the European Union and Central and South American countries against Reynolds Tobacco for laundering heroin and cocaine profits with Camel Cigarettes.