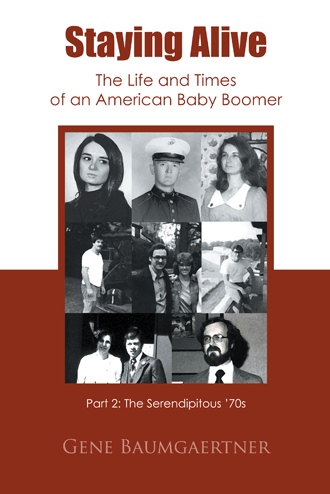 Staying Alive is the sequel to An Innocent Man—The Life and Times of an American Baby Boomer. The first book explored growing up in the 1950s and 1960s. Staying Alive continues the adventure into the serendipitous 1970s. The same characters we enjoyed so much in An Innocent Man return and try to take the great leap from late adolescence into early adulthood. Follow our baby boomers as they struggle to survive college, avoid or cope with the Vietnam War, and eventually join mainstream society. Watch these reckless students try to turn themselves into budding professionals; struggle with marriage, child-rearing, and divorce; and try to survive the ups and downs of the volatile 1970s. Totally submerged in their own lives and interests, they still can’t avoid the impacts of multiple wars, two oil embargos, rampant inflation, on-again off-again recession, and other world and life-changing events. Follow Ed Baker’s efforts to just keep “staying alive,” John Fitzmorris’s transition from Vietnam to “a normal life,” Johnny Latella’s desire to keep scoring—on and off the athletic field, Jerry Prinz’s simple desire to succeed in business, and Jack Fitzhugh’s tenacious struggle to turn bad luck into good. Will they survive the gyrating 1970s, and can they do it alone, or does friendship really make a difference?

Gene Baumgaertner has published four other books with Trafford—two history books on fifteenth-century England and two novels. One novel focuses on the adventures of a family of dinosaurs in the Cretacious period. The other tells of growing up in the 1950s and 1960s. Baumgaertner lives with his wife, Kathy, in Raleigh, North Carolina.