MY HINDU FAITH AND PERISCOPE 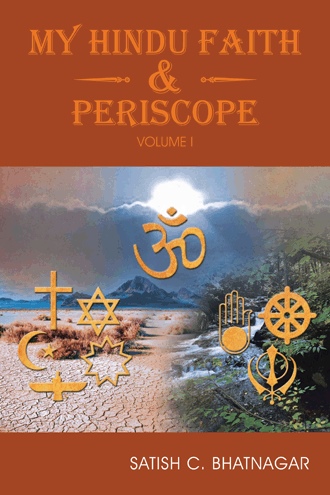 Every author believes that his or her book is meant for everyone. In this respect, however, I am the biggest beneficiary. In the process of writing these reflections for over ten years, and lately compiling and editing them, I have finally understood my faith deeply. Consequently, confidence that I lacked about Hinduism during my adult years has been replaced with pride in graying years! At times, it has taken me to such a height that in a few reflections, I have propounded a thesis that India will be a true secular country only when it will be constitutionally a Hindu state. The practice of secularism in India since 1947 has been reduced to anti-Hinduism and Hindu bashing—paradoxically more so by Hindus than by non-Hindus. It is making India porous for attacks by the terrorists, who are both homegrown and foreign-based. History is repeating itself! The Hindus remain totally divided in half a dozen political parties. A sterling lesson of India’s history is that traders, preachers, and persecuted humanity of every foreign faith were permitted, sheltered, and welcomed by the Hindu kings whose kingdoms stretched from the coasts of Malabar in Kerala to Kuchh in Gujarat to Karachi in Sindh—starting more than one thousand years ago. Doesn’t it make pristine Hinduism akin to humanism? What an incredible journey of this realization to dawn after nearly six decades!

Satish C. Bhatnagar has been professor at UNLV since 1974. In 1961, after finishing his master’s degree from Panjab University, Chandigarh, he taught in the colleges at Bathinda, Shimla, Kurukshetra, and Patiala. In 1968, he leaped from India to USA—at Indiana University, Bloomington, for an American PhD. A stroke of luck brought him to Las Vegas for one year, but it eventually became his hometown in the United States. One scenario: In 1975, his younger daughter was born in Las Vegas. She graduated from UNLV, married, gave birth to two kids, and is teaching in Las Vegas. As a visiting scholar, he has visited India three times, Malaysia twice, and Oman once. Annual overseas trips, long walks, and yogercises keep him oxygenated for his reflections on varied aspects of life. The uniqueness of his books is that they can be read anywhere. The reflections are independent, easily identifiable, and digestible. His interests in mathematics, history, philosophy, and religion have always been on parallel tracks.