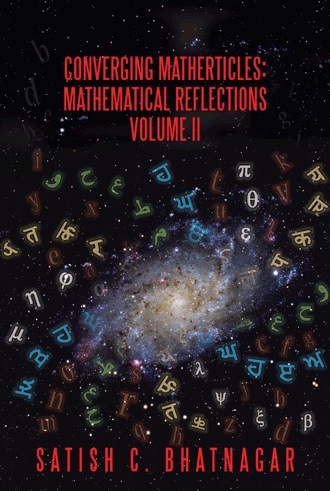 “How are you, Lloyd? I am Satish Bhatnagar.” “I appreciate your calling,” he softly responded. Lloyd is a 70+ year old student in my course, History of Mathematics (MAT 714). On the first day of class introduction, all my students fill out an 8-point student profile. One of the items is: What are your expectations in this course? The range of responses that the students have given over the years can be put together into a little storybook. However, Lloyd wrote only one word, Enlightenment. To which I remarked, “You are in the right place and hopefully with a right person!” After all, who spend more of their lime seeking spiritual enlightenment than the Hindus? Self-Realization, Law of Karma, salvation, enlightenment etc. have been the staple foods for their intellect for millennia. Lloyd is not the first septuagenarian student in the classes. Such students are very common at UNLV. On my very first day of teaching in Aug 1974, Leo Schuman was in my Differential Equations Course. He was 68 and I was then 34. On getting sick of puttering around the house for a year after retirement, Leo decided to go for MS in mathematics. His wife was also happy to see him leave home. He turned out to be one of the best students. After MS, he taught in the Department as a part-time instructor for ten years. Around the same time, Art was another 80+ year old student, who took only math graduate courses “to keep the sanity of his mind”. He was not interested in getting any degree. The presence of such ‘senior’ students in the class pushes the young ones to excel, and keeps the instructors on their toes. The number of students over 65 took a quantum leap 20 years ago when UNLV instituted a policy of not charging any fees from them. It is common in most US institutions. This defines western culture, or more specifically, the American culture. The social institutions in India are so much structured that it is unthinkable for any one after 50 to attend college for keeping the mind engaged. My mother always bemoaned at my studying after PhD. It took my wife several years to understand the American love for life-long learning. Lloyd had his MS & PhD (1962) in statistics from Columbia University. He comes from an era when statistics was not duly respected in traditional mathematics departments. It reminds me of the state of mathematics education presently. In another context, Lloyd told me of his taking calculus courses from Peter Lax, now one of the famous mathematicians, and 2005-winner of the Abel Prize recently instituted in 2003. Since he had witnessed events that are considered history for the younger generation, I have assigned him a project on the history of lower division statistics courses since 1957. While turning in his first weekly report, Lloyd told me of his having to miss classes for the next 2-3 weeks because of a major surgery. He was matter-of-fact about it, and I wished him well. His report has a unique touch about it that ended as: “This first week of the course has been very productive for me. If the remaining weeks are equally so, I don’t know how I will find time to do everything.” Nevertheless, this little note made my day!

Amazing experience. You are adventurous. Keep up your thoughts and observations. Your second-hand experiences are edifying. Robert W Moore, Emeritus UNLV Professor of Management (# 13) Your reflections always awe me. Thank you. Rohani, PhD, Professor in Malaysia (# 20) Satish, you have a special relationship with your students, which is heartening to see! All the best. George Varughese, Emeritus professor, UK and the Author of Crest of the Peacock (# 35) Thanks for sending your good valuable notes from time to time. My colleagues and I all relish the humor of your mathematics. Man Mohan Sharma, Ramjas College, Delhi University (#36) Thanks Satish – beautifully written – no one could have said it better. Allan Ackerman, Professor of Computer Science, College of Southern Nevada, Las Vegas (#51) There is no doubt your own life (intellectually and otherwise) has been enriched by your dedication to writing. …….Also, I believe when any of us enjoy something so much as you enjoy writing, we can live longer and healthier lives. Amritjit Singh, Langston Hughes Professor of English, Ohio University, Athens (# 70)

Satish C. Bhatnagar has been professor at UNLV since 1974. In 1961, he started his teaching career in India - in the colleges at Bathinda, Shimla, Kurukshetra, and Patiala. In 1968, he joined Indiana University, Bloomington for an American PhD. A one-year visiting position at UNLV brought him to Las Vegas, which has now become a home of his extended family. Annual overseas trips, long walks and yogercises keep him oxygenated for Reflections on varied aspects of life. The Reflections are independent and easily digestible! His interests in mathematics, history, literature, philosophy and religion go back to his college days in India, but nurtured in the US.