Shadows on the Seine 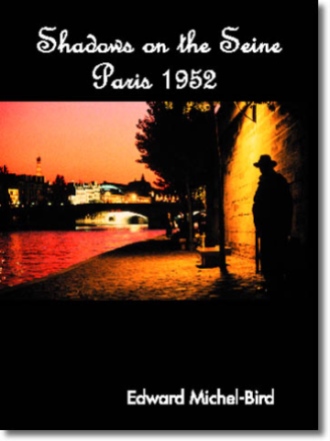 The background is post WW II Paris in 1952. After the humiliating German Occupation, the great city still struggles to reclaim its title as the City of Light. The sudden death of Monsieur Latille, multi-millionaire and CEO of a large, family-owned pharmaceutical company, plunges his wife and son into a clash of wills, and his young mistress, Geneviéve (and her lovechild) into a desperate situation.

Selfish and flirtatious Madame Latille, and her son, Anatole, and eccentric ex-seminarian, turn their backs on Geneviéve and conspire to "wipe the family slate clean". They refuse to respect the provisions M. Latille had provided for her and his child.

Just before his fatal heart attack, M. Latille receives a coded message from his old friend, Amédée, warning him that his life is in danger. Edward, a young Canadian Professor on sabbatical, (and bearer of the message) quickly takes stock of the situation. He is attracted to the young widow and allies himself with her cause. He helps the old gentleman escape from his Mansion prison and reunites him with Geneviéve and their lawyer, Chevalier.

After a violent confrontation with the young widow, Madame Latille softens her attitude, when she learns that Geneviéve is privy to certain unsavory documents concerning her past. Anatole, her unstable son, remains adamant. He is horrified when he meets his father's 13 year old lovechild for the first time: the boy is the spitting image of his tall handsome father and bears his name, Jean-Claude! Anatole is livid. His reilgious fantasies on morality turn his jealousy into vengeance. He is determined to wipe out both mother and child and ultimately conspires to do so through his contacts with the Mafia.

For Anatole, the last straw comes when his mother arranges for Jules, her artist and "escort", to move into the family Mansion, and finances his entry into an international portrait contest, using the handsome boy as his model. The thought of his father's bastard hanging in the national gallery for all to see reduces him to blind rage. When his attempts to destroy the painting fail, he hires a hit-man to do the job with explosives. Geneviéve risks her life to save her dear friend, Edward. All of which brings about a chilling but startling dénouement.

Later he was appointed Professor for three years at the Ecole des Traducteurs et Interpretes under the aegis of the University of Paris. Then, after his marriage, he returned to U.B.C., Vancouver, Canada, to accept an appointment in the Department of French.

He has published a number of articles, three textbooks, co-authored a fourth with his wife, and three novels, Shadows on the Seine: Paris 1952, Diamonds from the Dark Side, and Echoes From the Past. Other Voices, Other Climes (A collection of Ten Unique Stories) is also available.