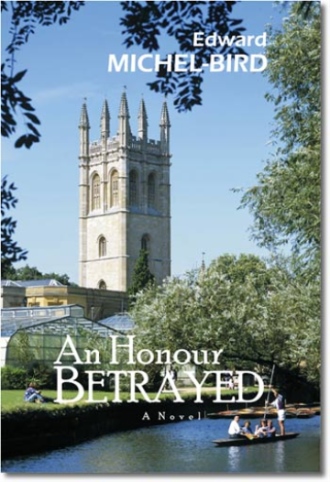 When word came that I'd won a Rhodes scholarship, I rushed across town to share the news with my Uncle Peter, but was shocked to find him at death's door. I was warned to say nothing that would excite him, but I told him quietly anyway. He smiled and said, "Close the door and sit down." His relatives took the hint with a scowl and left us alone.

"Time is short, Ken. You know what I'm going to say." I nodded as he went on.

"It's a piece of work I don't have time to finish. Will you help me?"

"Of course, Uncle Peter, anything you say." I was well aware that as a retired army Colonel, he had spent the latter part of his life protecting the rights of soldiers hastily de-mobbed at the end of WWII.

"There's no rush, Ken, you have a long life ahead of you, but it must be done."

"I understand. It's always that same man, isn't it? You've often mentioned him. Tell me again what he did?"

Uncle Peter laid back, closed his eyes, and fell silent for a moment and whispered, "He stole my comrade's identity, his fortune and his military honours! And so far the rogue has gotten away with it. He must be brought

At that moment his doctor stepped in and I was asked to leave. I heard the doctor say, "No more visitors until late tomorrow."

Uncle Peter died that night. And I had to leave for Oxford two days later wondering what I could possibly do, however, I do recall him saying, "I will send you all the evidence you will need."

Two weeks later, a battered old suitcase reached my digs in Oxford. It contained all of Uncle Peter's research concerning Lord Sebastian. Mr. Tupper, a retired lawyer, was a Godsend. He knew Uncle Peter well and had visited him. The new revelations contained in the old suitcase stunned him and spurred us all into action.

Mr. Tupper fed cleverly vetted morsels of information, anonymously, to the Army Chief, the Veterans Association, the newspapers, the tabloids, Gay clubs and other groups and clubs interested in military affairs, and certain M.P.s Most of these appeals fell on deaf ears until the subject came up during the question period in Parliament. In short, a small fire had been set and lit. The tabloids became bolder and important newspapers began to steal the thunder form the tabloids.

Finally, Lord Sebastian was asked to participate in a formal inquiry. He refused. His Scarlet Pimpernel tactics failed to amuse and further diminished his supporters. Second, his going into a hide and seek mode brought much sterner requests. Third, the threat of an arrest was invoked, as a point of national duty, when he failed to respond.

Surprise! The Rev. MacDougal, Sebastian's pastor, announced that his Lordship had prepared his mea culpa and would surrender peacefully if the police would grant him a brief respite to have it signed and witnessed by certain "friends".

After the banquet and the signing on the Estate, we all awaited the final dénoument. Would he really cave in so graciously? Suddenly news spread that Sebastian had disappeared once again, yet Blackie was still in the table. Gordon and I exchanged knowing glances.

I asked Mr. Tupper, "Do you think Sebastian will give himself up?"

Nervous, we waited outside near the paddock. The police grew restless. We all knew something had gone awry. And we all felt that there was something sinister afoot.

After the author completed his B.A. at the University of British Columbia, Vancouver, B.C. he went to Paris to complete his education and lived there for 10 years. He was awarded a Canada Council Grant and earned his Doctorate at the Sorbonne. As a student he held the post of English assistant and taught in the high schools of Paris for three years.

Later he was appointed Professor for three years at the Ecole des Traducteurs et Interprètes under the aegis of the University of Paris. Then, after his marriage, he returned to U.B.C., Vancouver, Canada, to accept an appointment in the Department of French. He has published a number of articles, three textbooks, co-authored a fourth with his wife.

His work in fiction: Other Voices, Other Climes, (a collection of ten unique stories) and six novels: Shadows on the Seine: Paris 1952, Diamonds from the Dark Side, Echoes from the Past, The Coverley Pines Affair, A Wild Yukon Adventure, and A Crime too Perfect. The author now resides in West Vancouver, B.C.