Other Voices, Other Climes 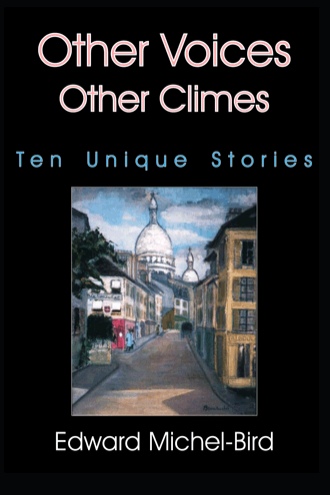 No.1 - Mischief on Campus (Dieppe revisited): The word "Dieppe" recalls the horror of that disaster - 900 killed and 1500 taken prisoner - and makes us think of the effect that carnage had on those who came back to tell the story. Many, such as Dylan Magee returned to university or entered as a freshman. The challenge was daunting; the sudden change from uniform to civies, from guns to books, did not heal all wounds.

No. 2 - Pamela's Potted Ferns: This lighter piece, tells of a young, naïve volunteer's introduction to the world of volunteerism. He offers to serve lunch to the elderly and the poor. He listens to their stories but gets carried away by their clever little follies.

No. 3 - The Little Eagle, (the Aiglon), a member of the French Résistance, and a national hero, becomes a hit-man in disguise, when the government fails to grant him the Légion d'honneur for his outstanding war-time services. A specialist in plastic explosives, he makes a contract with Anatole, a wealthy young scion, to "wipe his family slate clean" by eliminating his late father's mistress and her bastard child.

No. 4 - David and Goliath: Here we meet a big bully in a Paris High School who gets his comeuppance. The bully is brought down by a smaller, younger boy, who applies certain basic elements of pugilistic science - and becomes the school hero.

No. 5 - A Dazzling Discovery: Paul, a young architect, seeks a restful escape after a great personal tragedy. He goes to the U.K. on a quiet package tour. No sooner is he settled in his hotel room when he finds himself in the crossfire of a criminal investigation dating back ten years. He learns that Sebastian, one of a group of diamond thieves - involved in a £3,000,000 diamond heist - is trying to take over his hotel room. Chief Inspector Spencer places a guard in the hall for Paul's protection. Thanks to a series of insights, Paul finds the diamonds, but tells no one. He decides to disappear into the shady enclaves of the black market, hoping to emerge a wealthy man.

No. 6 - Birth of a Portrait: A sensitive young artist prepares his charcoal sketch for a portrait to be entered in an international contest. His subject is a strikingly handsome boy with remarkable features. Since the boy is a pianist, the artist takes his time to find the right pose at the piano. He emphasizes the boy's hands as well as his strong, handsome face. Will he be able to capture on canvas the youthful beauty of his subject and win the prize?

No. 7 - An Angel's Touch: A terrible car accident takes place in New York. The driver dies in the emergency ward. Three other passengers are spared. Suddenly they are all spirited away in a passing taxi before the police or the ambulance arrives. The police are baffled. No trace of the victims can be found in the hospital or in their wrecked, rental car. The case is written off as thw work of the Mafia. Years later, John Steele (one of the survivors) receives a midnight phone call from the hospital asking him to visit Charles Fleming, a missionary whose death he had witnessed forty years ago!

No. 8 - Mint-Fresh Canadian: An amusing and disturbing contrast between the thoughts and attitudes of a brand-new Canadian and a regular Canadian who takes his citizenship for granted.

No. 9 - A Naughty Affair: The scene is Paris. A sudden and unexpected flirtation evolves between a struggling young artist and a wealthy widow twice his age. An excellent dinner, preceded by too many apéritifs and followed by too many glasses of champagne, sets the stage for this encounter - prolonged beyond measure - by his warm, eager, and passionate entreaty to paint her portrait.

No. 10 - Phantom Lake: The story takes place in Flin Flon, Manitoba, a small mining town. Young love teaches the elders a leasson when family strife, money, and mystery try to block its path. A story of youthful determination, wit, ingenuity, and an unfailing sense of purpose.

Winston Churchill: Hardly a story, in the strict sense, but a youthful tribute. The author so admired the great statesman's oratory and magnificent prose that he wrote and published a poem in his honour while preparing his Grade XI by correspondence.

Later he was appointed Professor for three years at the Ecole des Traducteurs et Interpretes under the aegis of the University of Paris. Then, after his marriage, he returned to U.B.C., Vancouver, Canada, to accept an appointment in the Department of French.

He has published a number of articles, three textbooks, co-authored a fourth with his wife, and three novels, Shadows on the Seine: Paris 1952, Diamonds from the Dark Side, and Echoes From the Past.