The Fruit of the Spirit Series Book 3 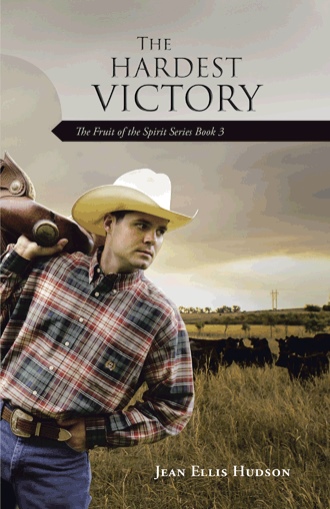 As Clem sat there in the barn, his mind went back to an earlier time when Thomas was seven years old and stole some candy from the mercantile. As he recalled, Thomas had gone into town with him to get some supplies. As children will do, Thomas roamed around the store looking at things, touching items occasionally. John Edwards, the owner, helped Clem gather his supplies, neither of them paying any attention to Thomas. Thomas came to the candy in large jars on the counter. He already knew what was there because he 'd looked at it enough. His favorite was peppermint candy. The thought came into his mind to take just one piece. Nobody would miss it. He looked around to see where his Pa and Mr. Edwards were, and when he saw they were busy he reached in and took one piece, then two more pieces and then three more pieces. He stuffed them all in his pocket. Clem finished his business and they left. Thomas wouldn't dare eat a piece of the wonderful treat in his pocket sitting there beside his Pa, so he waited till he got home. After he helped his Pa take in the supplies, he ran to the barn and climbed up in the hay loft to enjoy his candy. He stuffed two pieces in his mouth at one time and had such enjoyment with the peppermint flavor filling his mouth. "Hmmm," he mumbled aloud. "Thomas, is that you up in the hay loft?" Clem asked. Thomas froze when he heard his Pa's voice. He couldn't talk around the candy. What can I do? he thought. He didn't want to waste his precious candy, so he spit it into his hand. Then he said, "Yes, Pa, it's me." "What are you doin' up there?" "Nothin'." "You have to be doin' somethin'. Come down here." "Yessir." He slowly climbed down, still clutching the candy in his hand. Clem notice the fisted hand and asked, "Son, what are you holdin' onto so tight?" "Nothin'." "Yes, you are. Let me see." He waited while Thomas sweated on his upper lip and down his back. "Come on. Open it." Thomas opened his hand and said, "Just some ol' candy." "Where did you get it? I don't remember buyin' any candy in town. Did you buy it?" Thomas hesitated. "No, I ain't got no money." "Then how did you get it? Answer me and let's stop dancin' around it." "I got it at the mercantile, okay. I just wanted some candy and I took a few pieces." "I see. Sit down, Thomas. Let's talk." They sat on bales of wheat straw, but Thomas could barely sit still because he knew what he had done was wrong. He just dreaded what his Pa would say and do to him! "Bring it all out. I want to see how much you took." Thomas slowly pulled the candy out piece by piece and it totaled six pieces. Clem left if in Thomas' hands but went on to admonish him. "Son, you know it's wrong to steal. You've been taught better. Why did you take it? Were you hungry?" "I wudn't hungry or nothin'. I just thought I needed it. I'd worked hard and I should have it. That's all." His head was drooping by then. "Thomas, the Bible says in Exodus 20:15: 'Thou shalt not steal'. That's one of the Ten Commandments which were and are might important for God to write them down, twice even. Jesus Himself repeated it in Matthew 19:18: 'Thou shalt not steal.' We live by the Bible, Thomas. Do you understand that what you did was wrong?" "Yes, Pa." Tears started down his cheeks. "I'm sorry, Pa. I won't never do it again. Are you gonna whip me?" "No, I'm not. We're goin' to sit right here while you eat all that candy right now. Go ahead." Thomas struggled to eat the candy around the lump in his throat and the tears in his eyes, but finally he finished. "How do you feel, son?" "I feel sick." "I guess so. Your punishment will be to work for Mr. Edwards after school for one hour a day for each piece of candy you stole ... that's six days. Do you understand?" "Yes, Pa." Clem walked to the barn door, turned to Thomas and said, "You do know this is your supper." And he walked out.

Clem and Susannah Brown and their three adult children, Thomas, age. 21, Ruth, age 20, and Jeff, age 18, in the year of 1912, have much love within their family, but life is not without trials. Clem and Susannah discover that Thomas has a lack of self-control and can even trace it back to childhood. There is anger and jealousy brewing in Thomas that he does not control and thus he strikes out at family members. Upon the death of George Brady, Susannah’s father, each member of the family inherits a great deal which enables them to enlarge the farm and improve their lives. Ruth meets a fine young man and after a period of courting, they get married. Clyde Armour still works with Clem and is basically a partner by 1912, while he and his wife Lillian have two children. Another hired hand is added to the farm named Zeb Stuart. Their pastor Tim Hawthorne talks with Thomas a great deal about his problems, walking as a Christian, and staying out of certain establishments. Follow the route Thomas’ life takes as it intertwines with Jeff’s.

Jean Ellis Hudson has her B.A. and M.Ed. in Secondary Education/Social Studies and taught high school social studies for fifteen years. She went on to be a church secretary for several years. Upon retiring, she followed her dream of writing which she has wanted to do since she was fifteen years old. It only took her fifty years to get there! She enjoys writing Christian historical fiction. Her first book, A Journey to Faith, received a positive review from the US Review of Books which earned the book The Gold Seal of Literary Excellence. This was the first book in the series called The Fruit of the Spirit Series. Her second book, Learning to Love, was the second in the series. This current book is the third in that series. Her plans are to follow through all the fruits of the spirit in her series. Her interests include reading, writing, gardening, crafts, and graphic design. She lives with her husband, Jimmy, in Georgia.