The Fruit of the Spirit Series Book 4 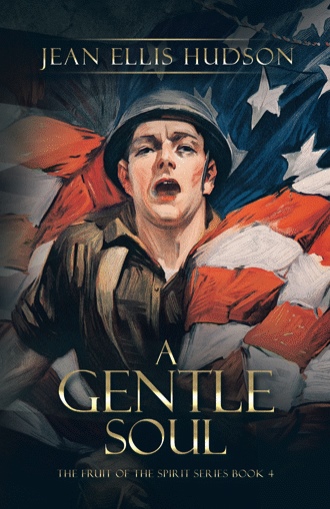 Jeff had let his mind wander off for a minute, and before he knew what was happening a German soldier rammed his bayonet into his side and almost pinned him to the ground. Jeff was able to turn face up a little and fire his rifle directly into the German's chest who hit the ground hard, but he was still moving and groaning. Jeff laid his rifle on the ground right at the German's side and fired again. The German was dead. Jeff took both of his hands to pull the rifle and bayonet out of his side which was bleeding profusely. He saw an American crouched close by and called out to him, "Give me some help here. Hey! Help!" What Jeff didn't know was that the American soldier had been shot in the chest three times and seemed to be frozen in place. Finally, a German came by and knocked him over. Jeff played dead. Then Jeff started working on getting his shirt off to wrap it around his middle to try to staunch the blood flow. It took him a long time and he began to feel weak. All of a sudden an American soldier's face appeared over him. "Are you alright, soldier?" Jeff could only shake his head. The soldier looked him over and saw the wound. He took his own shirt off and tied it around Jeff's waist pretty tight and firmly held his hands over the wound to put pressure on it to stop the bleeding. Then he picked him up to carry him to safety. When they got to the sandbags, the soldier simply stepped over the sandbags into the trench! He continued to carry him to the back line to the corpsman. He gently laid him on a cot and spoke to the corpsman to tell him the seriousness of the wound. The corpsman began work on Jeff. He realized that Jeff would need blood, but he couldn't use any of the wounded soldiers. Without even asking, the tall, blond-headed soldier who brought Jeff in stepped up and rolled up his sleeve. The corpsman obtained a pint of blood and then turned to set up a blood transfusion for Jeff. When he looked around, the tall soldier was gone! He looked in every direction and asked several people, but nobody had seen a soldier that matched that description. Over a period of days he asked men he came in contact with if they had seen such a man. No one had. "Jeff, you're being transferred to a hospital in England for better care than we can give you." Later, two soldiers came to move him to the ambulance that would take him to London. The movement of the ambulance helped Jeff drift off to sleep. When he awoke, it was dark outside. Then he realized they weren't moving. "Hey, driver. Driver!" A tall, blond soldier stepped into the back of the ambulance. "Are you alright, soldier? Do you need something?" Jeff looked up and felt unusual, like he had seen this me before. "Have I seen you before? You look familiar." "I don't know. Would you like some water?" "Yes, I would. I didn't realize how thirsty I was." Soon the driver brought him a canteen of water, and Jeff thought, This is goin' to be the warmest, worse-tastin' water in the world. He raised himself on one elbow and took the canteen. When he raised it to his lips. he tasted the coolest, sweetest water he had ever had. "Driver, where did this water come from? It tastes so good." The driver said nothing and Jeff continued to drink. "Ah, that was good. Thank you. Do you have anythin' to eat?" "Yes, just a minute." The driver came back with bread, cheese and an apple. "This is a feast! Wow! There is enough to share with the other fellow over there." "I'm sorry, Jeff. Your companion has gone home." "He's dead? When did this happen?" "About two hours ago. You need to go ahead and eat so we can be on our way." The driver cut pieces of cheese and apply to eat with a piece of bread. Jeff ate heartily and felt it was the best cheese, bread and apple he'd ever had. When he finished, Jeff thanked him and asked his name. "My name is Joseph." They sat and looked at each other for a couple of minutes, and Jeff felt very strange. "We must go. I need to strap you in again." "How much longer will it take to get to London, Joseph?" Probably about three hours or so. Are you comfortable enough?" "Yeah. Are you an ---?" "We need to get going." Joseph quickly went to the driver's side of the ambulance and off they went. That left Jeff wondering as the trip continued. Who really is this Joseph? When they reached the hospital in London, the nurses were getting Jeff settled. It dawned on him to wonder how they crossed the English Channel in an ambulance? I must be confused, he thought. We couldn't drive across the water. Maybe there was a ferry, but I don't remember it. I must be havin' hallucinations or somethin'. Later he began thinking back and tried to figure out who the tall, blond man was who drove him there. He hadn't seen him since they brought him into the hospital. There was just something about him he couldn't get off his mind. He seemed to only come when he needed him. The bread and water was extra good. Where did that come from? There was also an awesome peace he felt every time he was in his presence. His mind wasn't sharp enough right then to figure it all out, so he slipped off to sleep.

Clem and Susannah Brown’s youngest son, Jeff, has developed a good furniture business and has even bought the old saloon building in town and with the help of family and friends has remodeled the building for a furniture store. He has orders from people as far away as Beaumont, Texas. They all became aware of the building up of war in Europe but never thought the U.S. would be involved. Due to several circumstances, the U.S. declares war on Germany April 1917. The draft is passed into law, and Jeff, Jon (Ruth’s husband), and Zeb (newest hired hand) are all drafted. Jon is in the paymaster corps while Jeff and Zeb are fighting in the “muck and mire” of the trenches in France. Jeff and Zeb experience many horrid times experiences and the loss of new friends before their eyes. Zeb is injured early in 1917 and sent home. Jeff is injured not long before the war is over and after a stay in a London hospital he is sent home. Jeff finds Jon in the same hospital and works to get him out. Follow the ingenious ways Jeff and his good friend Reggie help Jon. Reggie goes home with them to Texas and works on the farm despite an injury. Be prepared to find Zeb a different man after the war and how Jeff tries to help him.

Jean Ellis Hudson has her B.A. and M.Ed. in Secondary Education/Social Studies and taught high school for fifteen years. She went on to be a church secretary for several years. Upon retiring, she followed her dream of writing which she has wanted to do since she was fifteen years old. It only took her fifty years to get there! She enjoys writing Christian historical fiction. Her first book, A Journey to Faith, received a positive review from the US Review of Books which earned the book The Gold Seal of Literary Excellence. This was the first book in the series called The Fruit of the Spirit Series. Her second book, Learning to Love, and her third book, The Hardest Victory, continue the series. Her plans are to follow through all the fruits of the spirit in her series. Her interests include reading, writing, gardening, crafts, and graphic design. She lives with her husband, Jimmy in Georgia.