The Plains of Aamjiwnaang 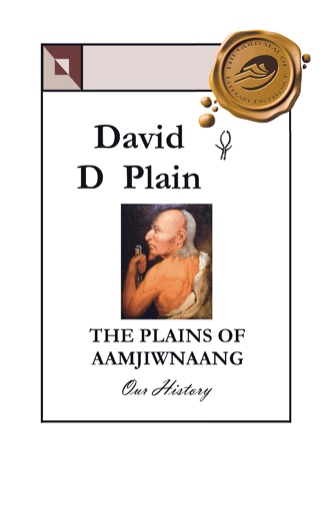 Betrayal—The Indian War of 1790-1795 The border determining lands ceded to the Americans with “Indian Country” continued to be a major stumbling block to peace between the First Nations and the United States of America. First Nations insisted the boundary line agreed upon in the Treaty of Fort Stanwix in 1768 be adhered to. That boundary line was the Ohio River. However the American government’s official policy was not to discuss any boundary line but instead to offer to compensate the First Nations with goods and annuities for huge tracts of land to be opened up for white settlement. Huge numbers of American pioneers had already crossed the Ohio to squat on First Nations territory even under the threat of attack and certain death. In fact the Big Knives claimed all the territory south of the Great Lakes as far west as the Mississippi as theirs according to the 1783 Treaty of Paris. In 1785 Congress passed an Ordinance to divide the territory north and west of the Ohio into states to be governed as a territory. In 1787 they passed a more complete Ordinance appointing Major General Arthur St. Clair Governor of the new Northwest Territory. This huge tract of land encompassed what is now the States of Ohio, Michigan, Indiana, Illinois and Wisconsin. The Miami War Chief, Little Turtle had forged a confederacy that included the war chiefs and warriors of the Miami, Potawatomi, Shawanee and Ahnishenahbek. Little Thunder, was the pre-eminent war chief of the Ahnishenahbek and his two sons; Red Sky and Anchau were young warriors at this time. The many skirmishes that ensued during the late 1780’s led to decisions by Washington that would at first prove disastrous to the Big Knives. In 1790 President George Washington authorized Governor St. Clair to raise troops to punish our Confederacy for having the audacity to defend our lands. To this end he raised a force of twelve hundred militia and 320 regulars at Fort Washington, Cincinnati, to be led by Brigadier General Josiah Harmar. Little Turtle and his confederacy retreated before Harmar’s lumbering army. They lured Harmar deeper into their territory where they had set at trap in the Maumee Valley near what is now Fort Wayne, Indiana. After stringing out his army into one long column Little Turtle sprung the trap attacking the column’s flank killing 183 and wounding 31. Harmar’s army was panic stricken and fled in disarray. Harmar claimed a victory but had to face a board of inquiry where his defeat was whitewashed. However, none other than Major General St. Clair would replace him. In 1791 St. Clair raised an army of fourteen hundred militia and six hundred regulars and he marched them out of Fort Washington to finish what Harmar had failed to do. St. Clair established two weak outposts named Fort Hamilton and Fort Jefferson and then chose as his base a high spot on the Wabash about fifty miles from present day Fort Wayne. By this time his army had shrunk to fourteen hundred due to desertions. Little Turtle’s alliance attacked the army’s camp head on at dawn scattering the Kentucky militia. St. Clair tried to rally his troops but to no avail. His second in command, General Richard Butler lay wounded on the battlefield. The militia shooting wildly hit some of their own men and bayonet charges were mowed down with gunfire from the surrounding forest. St. Clair lost half his army while standing his ground but when he realized he was threatened with total annihilation he ordered a retreat, which was no orderly one. Most of his men threw away their arms in a panic stricken flight. With close to one thousand casualties this would be the worst defeat the United States would ever suffer at the hands of the First Nations. The incident on the Wabash became known as “St. Clair’s Shame”. President Washington cursed St. Clair for being ‘worse than a murderer’. First Nations’ hopes and confidence soared. Runners were dispatched to all nations from Alabama to the Great Lakes as far west as the Mississippi to invite them to smoke the pipe in support of the united defence of their land and country. In October 1792 the Shawanee hosted a great congress at the Glaize, where the Auglaize River flowed into the Maumee. Delegates from a wide range attended: Shawanee, Delaware, Mingos, Miami, Munsees, Cherokees and Nanticoke whose territories needed defending. Also present and promising support were Wea from the Wabash, Sacs and Fox from the Mississippi, Six Nations and Mahicans from New York and Iroquois from the St. Lawrence. The Three Fires Confederacy was there as well as the Wyandotte from Sandusky and Detroit. Little Thunder almost certainly attended as the leading war chief of the Ahnishenahbek along with his two warrior sons. This was the largest Confederacy ever brought together by First Nations alone.

Aamjiwnaang is the name the Saulteux Band of Ahnishenahbek (Chippewa) gave their hunting territory that encompassed both sides of the St. Clair River and the adjacent lands in the southern part of Lake Huron. The book focuses on four generations of Chippewa chiefs beginning with Young Gull who led a group of Saulteux people south from Lake Superior in the first decade of the eighteenth century. Young Gull's son Little Thunder, grandson Red Sky, and great-grandson On The Plain subsequently played important roles interacting with the French, the British, the Americans and other First Nations allies. Events cascade from one historical episode to another... from the establishment of Fort Pontchartrain (Detroit) through the French and Indian War, Pontiac's Rebellion, the American Revolution, the Indian War of 1790-95 and the War of 1812. The book describes such famous characters as Antoine de la Mothe Cadillac, Generals Montcalm and Wolfe, Pontiac, George Washington, Daniel Boone, Mad Anthony Wayne, Sir Isaac Brock and Tecumseh. Participation in such famous battles as Fort William Henry, Fort Necessity, Blue Licks, Fallen Timbers, Frenchtown, Detroit and Moraviantown are vividly described and the consequences on the Chippewa are well researched. The book culminates with the coming of the missionaries, the signing of land surrender treaties and the ensuing paternalistic "reserve era". "The Plains of Aamjiwnaang is an excellent historical account... informative with clearly organized chapters... the research is superb." Douglas Gordon Learning Coordinator (Retired) Thames Valley District Board of Education London, Ontario, Canada.

David D. Plain is a member of the Aamjiwnaang First Nation and a grandson of Chief On The Plain. He holds both undergraduate and graduate degrees from Tyndale University College and Seminary, Toronto, Canada. Always a lover of history, he has devoted much time and effort to his family's genealogy and how it has affected the history of the Ahnishenahbek of Aamjiwnaang.