WAYS OF OUR GRANDFATHERS

Our Traditions and Culture 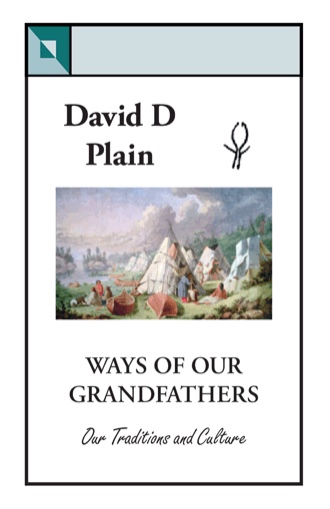 The largest linguistic group in the area was by far the Algonquian group. Speakers of this language stock included the Cree, Menominee, Sauk, Fox, Kickapoo, Miami, Illinois, Shawanee, and Delaware, as well as the members of the Three Fires Confederacy, the Ahnishenahbek (Chippewa), Otahwah and Potawatomi. By the time we moved into Aamjiwnaang the Erie, St. Lawrence, and Neutral Iroquois had disappeared and the remnants of the Huron and Tionontati had merged to become the Wyandotte. One can see by these lists the diversity of languages spoken in the Great Lakes area.

Ways of Our Grandfathers compliments David D. Plain’s previous book, The Plains of Aamjiwnaang. While his first book focused on the history of the Anishinabek (Chippewa) of Aamjiwnaang territory, Ways of Our Grandfathers describes Anishinabek culture and traditions from the pre- and early-contact period with Europeans. It covers such anthropological topics as social life, economic life, and religious life. Clear descriptions of characteristics, language, political structure, band designations, and their totemic system are illustrated. Gatherings, games, and stories are depicted with vivid illustrations. Construction of their dwellings and canoes are described, as well as methods of hunting, fishing, and sugar-making. Trade routes and places of trade are given as well as types of trade goods. Religious life is detailed and includes a description of the political structure of the Midéwiwin Medicine Society, healing practices, and death customs. The book includes an appendix listing many traditional medicines. Another appendix provides a detailed description of a Midéwiwin initiation ceremony performed on the banks of the St. Clair River recorded verbatim by a local missionary.

David D. Plain is a member of the Aamjiwnaang First Nation and lives on Aamjiwnaang territory. He holds both undergraduate and graduate degrees from Tyndale University College and Seminary, Toronto, Canada. In his youth, he had the privilege of having as mentors the elders whose memories reached back into the nineteenth century. Their stories, as well as fully researched historical documents, have provided him with an excellent knowledge of Anishinabek history and culture.