Poems from an Eclectic Mind 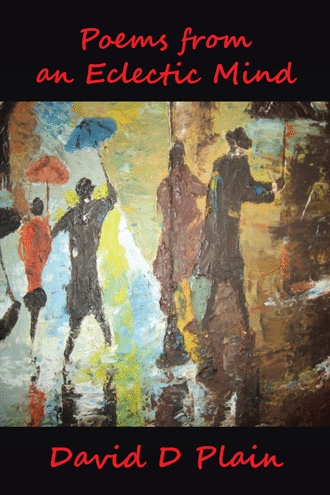 Death's Sudden Embrace 'Death's Sudden Embrace' is a love sonnet that ends badly. The time is World War Two, the place is London. The young WAC is a teletype operator attached to Army Intelligence at Allied Headquarters. Her lover is a fly boy who pilots a Lancaster bomber on nightly bombing runs over German occupied Europe. There were many such young women who did not know when their young men flew out at night which ones would return in the morning. And so love and life was lived day by day. This is perhaps my favourite poem. You see, the young lovers in this sonnet were my parents. Ticker tapes ticking enhanced twenty-fold Intel arriving bad news to behold Blitzkrieg has started tanks roll over lines Bombs fall on London the damn war confines To cafes below peace can be gotten But duty comes first success can be boughten By lives that are lost they fly through the black Then music and dancing the fliers are back! That one special airman comes right on time She lives for the daylight one day at a time He enters the room it brightens her day Her heart skips a beat love's funny that way But this time he's gone, cafe's abandoned Missing in action... His death was beckoned. Worm Pickers' Delight A poem reminiscing about a lesson learned during those days between adolescence and adulthood. A time when I was most desperate to grow up, get a job, my own place and support myself. Oh, and a car. I needed a car! But sixteen was not the age that these things would come. “Worm Pickers Wanted”... Gave phone number only The classified said, and said rather pronely. The youth was searching desperate to find Employment to help him out of a bind. He needed a job to help with the rent Lest he be moving from room to a tent So he picked up the phone and dialed the number Although the position was just for the summer. “Come on right down!”... That thickened the plot. He did right away... Was hired on the spot. The motley crew scrambled into the van None could speak English. The adventure began. Elastic bands strapped tin cans to his ankles So tightly they hold.... Oh how it rankles! The lantern was strapped tight to his head He's ready for work but what lies ahead? Soon they arrived at work's destination He scarcely could stand the anticipation! Cube van's back door swung open to view The job site's expansive, outside his purview. A golf course it seems is where he would work All through the night his sore arms would jerk Like a chicken he's pecking the ground all around Picking up worms from greens, they're fogbound The back it is bent from dusk until dawn While filling those cans with worms off the lawn He wished the damn night wasn't so long If only the rent could be paid with a song. After suffering weeks of this horrible torture While nothing was done to increase his stature. Convinced that his back was eternally bent Being paid by the can barely covered the rent. So he thought of a plan to escape the long anguish No longer he thought will he toil, will he languish To college he'll go and get a degree! Back to his parents and give them the plea He'd learned his lesson and the heart of the matter Life's really the pits at the end of the ladder Education's the answer... A career after college! They welcomed him home secure in the knowledge He'd try even harder receiving good grades Make his mark in this world... Success and in spades! He's old now, retired and looks back on his life Knowing all that he owes to that horrible strife 'Worm Pickers Wanted' how those words blessed A lesson in life. Who would have guessed? A valuable teaching from a job such a fright On that golf course they called 'Worm Pickers' Delight'.

Poems From An Eclectic Mind is his first foray into the genre of poetry. The title reflects the collection, eclectic! They run the gamut from spirituality to science to nature. Many are the author’s reminiscing of past life experiences and events. There is literally something here for everyone.

David D Plain is an aboriginal historian/author from Aamjiwnaang Territory, Canada. A graduate of Tyndale Seminary, Toronto, Canada he has published four books: three non-fiction and one historical fiction. One non-fiction The Plains of Aamjiwnaang won a Golden Scribe Award in 2008 and was short listed for an Eric Hoffer Award in 2014.