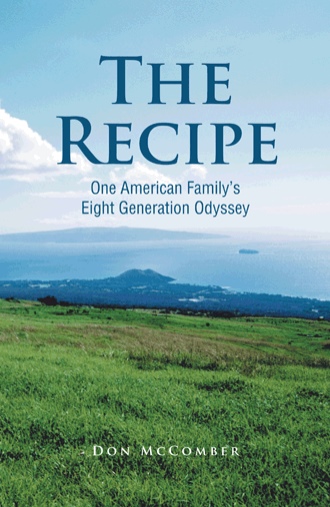 Young Harmon told the entire story of his experience with old Harmon. He spent several hours over the glowing fire that evening detailing how they had narrowly survived, thirst and Indians and how he finally had to run for his life leaving old Harmon behind. His blue eyes, glittering in the firelight entranced Lydia, and it was then and there she fell in love. He told her how his Father had come from Scotland, was held by the French, then was grounded at Chesapeake and found his way west to the Oneida Indians where he lived for a decade and fathered his brother Kanti. He told her about his Mother and brothers and sisters and the trading posts they started in St Louis, Independence and Confluence. And he told her about the recipe that had always been a good source of income for the family. When the three awakened the next morning and could see the mountain tops gleaming pink in the morning sun, each knew that something special had happened to Harmon and Lydia.

As she watched his boat disappear into the distance on Loch Carron, Sarah prayed that her blue-eyed bastard son would have a simple, full, and happy life. She would never have dreamed that this boy, the product of a rape, would make his way to the shores of the new America, marry twice, father four sons and a daughter, become a successful merchant, and help pioneer the West. One of those sons fathered thirteen children, the youngest of which was the grandfather of the author. Along the way, this intrepid line of men and women repeatedly had to fight for their lives against both Mother Nature and other men. The adventure started in Inverness, crossed the Atlantic, then went west to Colorado and back several times. They lived with the Oneida Indians, fought and died in the great wars, killed Mexican slavers and river thieves, endured prairie blizzards, tornadoes, and dust storms, and captured bandits. All the time they spread good will with their songs of the old times and the tasty treats of “The Recipe.” This story lets you experience the adventures and emotions of those stalwart men and women as they traveled across primitive America and made their way through eight generations and two and a half centuries of history.