Death of All Life On Earth IV 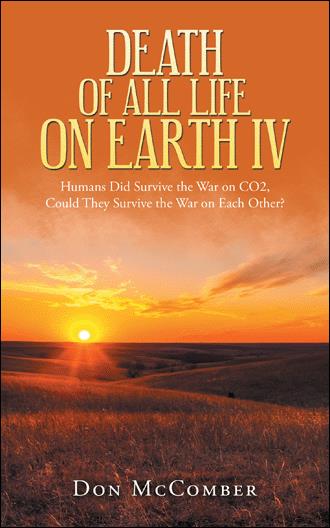 “I understand that you have been selected to explore to the east, and find out what ever happened to Washington DC. We know the politicians that caused the Period of Death, at the time had giant bunkers with decades of food and water. We do need to know if we and our sister colonies here in the west are alone. Go with my blessing my dear Maxey,” Mandy Crites said to her Great Grandson. It was the last time she would see the young man who uncannily resembled her first husband William. After he had hugged her for the last time, Mandy sat and watched him ride off into the distance. She had seen all of her men go off into the unknown many times during her life, and they had always returned to her. But she knew her time was short and even though she had been blessed with good health her entire life, she sensed that her time was near. Mandy remembered all the difficult times she and her family had during the last half century and every time, sooner or later, they had triumphed; they had survived. She sat back and let the morning sun warm her; all she could see of her latest “son” was the distant sunlit dust kicked up by his horse.

Since the Period of Death, survivors wondered if any of the government of the old USA survived. Then, a small group actually traveled to the eastern seaboard and Washington DC to find out. They found that most of the survivors there were hostile and had to fight nearly every step of the way. This final book of the series finishes the story of death for most and survival of a few.

He was born and raised in a tiny prairie town, had a career as a scientist, traveled the world and developed a deep respect for American Heritage. His background helped him thoroughly research the science involved in climate change and recognize the fragile and critical part carbon dioxide plays for life on earth. He also recognizes the catastrophe involved with any decrease in this vital atmospheric gas and writes about it in this four-book series.